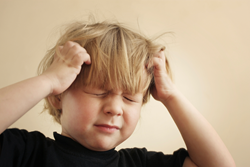 It happens around this time every year: kids are at summer camp for about a week and then the appointments start flooding in.

Though Summer has not officially started, June is the time that warmer temperatures and higher humidity levels begin to make their way to Miami, according to World Weather & Climate. These are prime conditions for head lice, and local head lice removal company, Lice Troopers, has seen a spike in cases in the last month, which they attribute to these conditions.

“It happens around this time every year: kids are at summer camp for about a week and then the appointments start flooding in,” says Lice Troopers owner, Arie Harel. Harel reports seeing nearly double the number of confirmed cases in his treatment centers in the last 30 days versus the 30 days prior. To combat epidemics during the summer, the company provides partnerships and screening services to local summer camps. “Prevention and early detection are key in keeping lice epidemics at bay,” Harel states.

Lice Troopers urges parents and camp administrators to be vigilant and educate their children on how to avoid an infestation during this high-risk time. Primarily that means not sharing personal items such as hair ties, combs, brushes, and sports equipment.