Lycotec Ltd., a biotech company based in Cambridge UK, announces that they have developed the World’s First Longevity SIRT Chocolate, which after ingestion provides a blood level of unmodified trans-Resveratrol, t-RSV, equal to its level after drinking red wine. 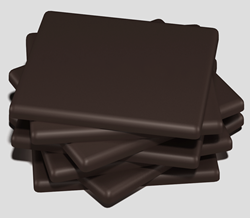 Lycotec Ltd., a biotech company based in Cambridge UK, http://www.lycotec.com announces that they have developed the World’s First Longevity SIRT Chocolate, which after ingestion provides a blood level of unmodified trans-Resveratrol, t-RSV, equal to its level after drinking red wine.

t-RSV is the molecule of plant polyphenol class which is typically present in red grapes, some berries, cocoa and nuts. There are a number of beneficial health effects of t-RSV from cardioprotective to antidiabetic. However, one of its intriguing properties is the ability to activate a group of SIRT genes. These genes are responsible for controlling cellular stress protection and longevity.

When t-RSV is consumed as part of food, or a beverage, or as an isolated extract in the form of most supplements, it quickly gets modified and inactivated in the digestive tract. Drinking red wine is the only known exception when t-RSV can reach the blood in an unmodified active form at a detectable level.

Lycotec has developed smart chocolate as a platform for a new generation of functional food.
http://www.lycotec.com/lycotec-presents-smart-chocolate-as-space-functional-food-at-july-uk-space-conference/

One of the main challenges of fortification of chocolate is a fairly quick degradation of molecules or substances newly introduced into it. The main reason behind this is the intrinsic composition of chocolate, which by its nature is a product of microbial and fungal fermentation. It not only has an acidic environment but also active degrading enzymes present there. This in combination creates a rather hostile environment for many newly introduced ingredients, which can lead to their breakdown and inactivation.

To overcome this barrier, a new technology has been developed which can protect these ingredients from degrading factors of not only the chocolate matrix but the human digestive system too. This technology creates a chocolate where t-RSV is protected and which helps to increase its absorption in an unmodified active form.

It was important to select for the trial people who would be the most likely target population of this product. Therefore, healthy middle-aged men and women were recruited. It was a double blind, cross-over pharmacokinetic study, in which volunteers blood was collected every hour for 4 hours after ingesting the chocolate.

The study confirmed that the technology worked, and the level of unmodified t-RSV in the blood of volunteers after ingesting all prototypes of the experimental chocolate was significantly higher than in the control groups. In the milk chocolate series the best prototype gave a 7-fold increase, and for the best dark chocolate 14-fold.

Although this level remains 3-5 times below that after consumption of one of the most t-RSV rich red Burgundy wines, it was achieved by ingestion of only one piece of 10 gram of the new chocolate, while for the wine it was half a bottle.

An additional important observation of this clinical study was that after ingestion of this dose of the Lycotec chocolate, the postprandial concentration of the blood glucose was still below that of its safe upper threshold of 6 mmol/L. Consumption of the control chocolate, however, led the glucose to reach this level and even higher.

This means that the new product has a lower glucose impact on the body than conventional chocolate, which makes it safer for people with diabetes and more positive in calorie intake management.

These results demonstrated that the new Lycotec chocolate can break the monopoly of red wine as the only significant source of unmodified active t-RSV in human blood.

The inventor of this technology Dr. Ivan Petyaev emphasizes that the main objective of the development of this new product is the creation of a functional food, which expands consumers’ access to clinically proven absorbable t-RSV.

If it happens to be of delightful taste then more people can enjoy looking after their health with or without wine.

The World’s First Longevity SIRT Chocolate will be introduced to the technology and scientific community later this month at the 10th World Congress on Polyphenol Applications, in Porto, Portugal http://www.polyphenols-site.com

The product will be commercially launched by the end of this year by Lycotec’s partner Cambridge Chocolate Technologies
http://www.lycotec.com/lycotec-presents-smart-chocolate-as-space-functional-food-at-july-uk-space-conference/