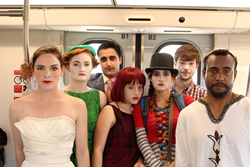 Seven strangers meet on the subway. When the train crashes, these very different people come together, share the secrets of their hearts and realize that sometimes a train wreck is all your heart needs. Physical comedy combines with hard human reality to create a beautiful and surprisingly heightened comedy about how we can conquer our fears when we are finally seen and heard. In Gina Rose Powell’s beautiful new play, we learn how a badly timed train wreck may just be what our world needs.

Enter the lives of a refugee from Libya searching for his lost wife, a teenage runanaway trying to make a fresh start, an abused bride who is running for freedom, an Indian Immigrant accused of being a terrorist, a single woman who feels invisible, a tornado victim who has lost everything, and a poet who hopes to heal the world with her words.