New study by Psychtests.com reveals that people who set low expectations for themselves are not just afraid of failure - they have a host of psychological blocks that are holding them back from success. 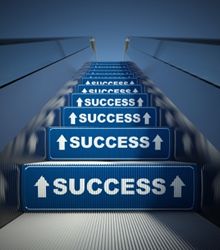 Setting the bar low will not guarantee success.

Setting the bar low is a sign that there are deeper issues that are holding a person back from attaining their full potential.

Conventional wisdom preaches the benefits of moderation, whether it’s a matter of indulgence or the pursuit of success. In terms of the latter, setting the bar too high can result in disappointment, perhaps even self-loathing. However, those who set the bar too low, risk more than just slow progress toward their goal.

Research from PsychTests.com reveals that behind the tendency to set low expectations is a debilitating fear of failure, of success, of the social consequences of success, and a generally paralyzing sense of ineptitude.

Analyzing data from 16,144 people who took their Success Likelihood Test, researchers at PsychTests paid particular attention to people who set the bar high for themselves and those who set the bar low. Aside from being significantly less ambitious (average score of 34 for the low group vs. 77 for the high group, on a scale that ranges from 0 to 100), individuals with low self-expectations were also:

Their limited potential for success, however, is entirely self-inflicted, and appears to come from a deep-seated fear. The low expectations group essentially set themselves up for failure from the start, thwarting any chance of achievement whatsoever. For example, according to PsychTests study,

“While it seems like a foregone conclusion that setting your expectations low will guarantee success, our study shows that this isn’t the case at all,” explains Dr. Jerabek, president of PsychTests. “Even though the high expectation group had a propensity to set goals for themselves that were quite difficult to achieve, they still had a higher likelihood for success, and refused to be held back by a fear of failure or the burden of responsibility that success can bring.”

“People who set low expectations are their own worst enemy. They are not setting the bar low because they want to ‘test the waters’ or pace themselves; they are setting it low because they see the path to success as a minefield of problems. With failure comes the potential for humiliation and disappointment; with success comes the potential for jealousy or added pressure. Couple that with self-doubt and the fear of not being good enough, and what you have is one stumbling block after another. Setting the bar low – or not setting any expectations or goals at all – is a sign that there are deeper issues that are holding a person back from attaining their full potential.”

Want to assess your success potential? Check out http://testyourself.psychtests.com/testid/2138

Professional users of this test can request a free demo for the SLPro - R2 (Success Likelihood Profile - 2nd Revision) or any other assessments from ARCH Profile’s extensive battery: http://hrtests.archprofile.com/testdrive_gen_1

Setting low expectations is not just about a lack of confidence.There’s an intense fear - of not being able to live up to expectations, of failing, or of being humiliated.