R. Helen Davis pens relatable story to encourage all people to travel with God no matter where life’s journey is headed 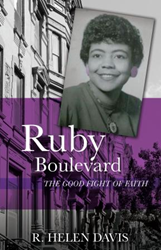 Knowing you are already a victor, will keep you from being a victim.

R. Helen Davis’s new book, Ruby Boulevard - The Good Fight of Faith, ($13.99, paperback, 9781498476195) chronicles the author’s beautiful mother, Ruby – a special woman who possessed breathtaking beauty, brains, and a great sense of humor. This book takes you on Ruby’s amazing faith-filled journey as told by her daughter. The story follows an aging Ruby who comes to terms with a necessary relocation from her home in Connecticut to Georgia, to live in close proximity to her daughter’s family. Glimpse into Ruby’s emotional adjustment to her new surroundings in the country and the reality of a failing body stricken with a puzzling blood disorder. Her courageous battle with illness became part of God’s calling her to a greater purpose in His plan. This book encourages readers to become conquerors of Jesus over the trials and issues life throws at them, caused by Satan’s attacks. This story will reveal that all people have already won the battle against Satan, if each person lets go and lets God lead.

“Life will happen to all,” states the author. “No matter who you are, expect a fight. Knowing you are already a victor, will keep you from being a victim.”

R. Helen Davis is a devoted wife, and mother of two sons. She serves as an Evangelist and Spiritual Midwife in the Kingdom of God and preaches the Word of Healing and Deliverance. She has traveled and sang for over 30 years of her life. Rae Helen accepted her assignment early in her life when God called her by name. Rae Helen also is founder and CEO of Ray Expressions. Currently residing with her family in Soperton, Georgia. As the daughter Ruby, R. Helen Davis was an eyewitness to every event taken in this inspiring story.

Xulon Press, a division of Salem Media Group, is the world’s largest Christian self-publisher, with more than 15,000 titles published to date. Retailers may order Ruby Boulevard - The Good Fight of Faith through Ingram Book Company and/or Spring Arbor Book Distributors. The book is available online through xulonpress.com/bookstore, amazon.com, and barnesandnoble.com.