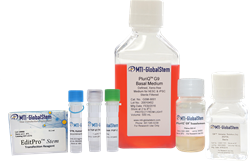 With such high efficiency delivery, as high as 90%, it is not necessary to electroporate, flow sort or include an antibiotic selection in the editing design.

The system includes the G9™ Maintenance Medium and G9™ VTN Recombinant (vitronectin) coating for culturing human induced pluripotent (iPS) or embryonic stem (hES) cells in a manner that maximizes transfection with the included EditPro™ Stem Transfection Reagent to deliver genome editing constructs. EditPro™ Stem is optimized for delivery of CRISPR/Cas9 editing via DNA Cas9 vectors, Cas9 mRNA with DS DNA (G-block), Cas9 mRNA with tracr/guide RNA, or Cas9 protein with tracr/guideRNA. It is effective for delivery of TALEN and ZFN editing tools as well. iPS or hES cells, when grown on the G9™ VTN included in the system in G9™ Maintenance Medium, maintain their pluripotency in a monolayer culture that is ideal for even, high efficiency transfection when using EditPro™ Stem. The G9™ Versene is used as a gentle, easy, non-enzymatic method of passaging the cells and is scalable to higher throughput culture. PluriQ™ G9™ Cloning Medium supports single cell/well clonal selection for human iPS or human ES cell lines after gene-editing.

Dr. James Kehler VMD, PhD, Director of Scientific Alliances at MTI-GlobalStem, comments, “With such high efficiency delivery, as high as 90%, it is not necessary to electroporate, flow sort or include an antibiotic selection in the editing design. The flexibility to co-deliver DNA, RNA, and/or Protein with EditPro Stem makes it easy for researchers to use the best editing tools for their cells and applications.” He adds, “We have optimized the culture conditions, so that scientists don’t have to. Using the G9 system components together maximizes transfection efficiency, while maintaining high viability and pluripotency of human stem cells. By taking advantage of the gentle, single cell dissociation provided by Versene and using our G9™ Cloning Medium, researchers can simply dilute and plate 1 cell per well to establish and expand clonal lines of human iPSCs that maintain pluripotency. This technical achievement overcomes human pluripotent stem cells' propensity to die or differentiate when plated as single cells, and enables scientists to readily create clonal, genetically modified lines for their experiments."