Women’s business travel start-up maiden-voyage.com has secured close to half a million pound investment from private investor and business angel Tony Rice and he has also joined the board as Chairman. 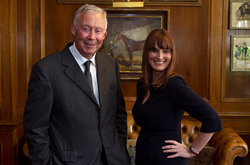 Carolyn is a very dynamic and creative entrepreneur and maiden-voyage.com offers a capability which is not only unique but also beneficial and needed by female travellers, employers and travel industry players to fulfil their duty of care

Pearson launched the site because she was frustrated with the lack of opportunities for women to explore the cities they were travelling to on business and to connect with other female travellers after spending too many nights spent in hotels eating room service and dining alone in hotel restaurants. She created a platform through which women could meet up when travelling on business. Today, maiden-voyage.com recommends female friendly hotels accredits business travel providers and ‘travel aware’ employers and provides female traveller safety training and produces industry research, driving best-practice across the industry.

Speaking of the investment, Rice said “I got involved in maiden-voyage.com two years ago when Carolyn and I were speaking at an event at Cranfield School of Management and subsequently stayed in touch. I acted as a mentor to Carolyn as she developed the business concept and model. When she was looking for investment to accelerate the growth of the business I was delighted to participate as Carolyn is a very dynamic and creative entrepreneur and maiden-voyage.com offers a capability which is not only unique but also beneficial and needed by women travellers, helping employers and travel industry players to fulfil their duty of care to their female managers and staff”.

Rice progressed his career through the finance function at British Telecom and subsequently finance and general management roles at British Aerospace culminating in Group MD of Commercial Aircraft responsible for Airbus and Regional Aircraft production and operation. He moved to Chief Executive of Tunstall, the private equity owned telecare business, in 2002 until its sale in 2005, when he became CFO of Cable and Wireless, the Footsie 100 telecoms company and subsequently CEO from 2008 to 2013.

Rice has been a serial investor in the SME sector for many years in a variety of different industries including software, manufacturing and telecoms. He chaired Alexander Mann the HR Outsourcing business until its sale in 2013. He is also an NED of the housing charity, Shelter, and the Whittington NHS Integrated Care Trust in London.

Pearson said “Tony brings a wealth of knowledge with him across many different sectors and his particular skill in growing and scaling businesses will undoubtedly take us to the next level. His skills and knowledge are complimentary to mine and the investment will be used to replace our predominantly freelance staff base with industry heavyweights, revamp our technology to increase growth and member engagement and convert our classroom training modules to elearning to that we can reach a wider global audience.