Study finds almost half of the top 20 national retail groups are not 100 percent compliant with global credit card security standard. 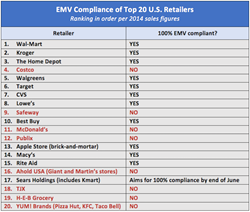 CreditCardForum, the premier one-stop resource for and by consumers seeking in-depth information, opinions and advice on credit cards, released today new research that found nearly 45 percent of the largest retailers in the U.S. are currently not compliant with the global EMV (Europay, MasterCard and Visa) technical standard for payment cards they were previously required to adopt.

The study found that of the 20 largest members of the National Retail Federation by volume of sales, nine are currently not 100 percent compliant with the protocol of requiring chip-enabled cards to be inserted rather than reading the magnetic stripe on the back of the card at the point-of-sale.

“It is quite surprising that not all of the major retailers are 100 percent compliant, considering failure to adopt the EMV standard by the specified deadline shifts fraud liability from issuers to merchants and fails to protect in-person consumer payments with the enhanced security offered by chip cards. Having said that, consumers should keep in mind the EMV standard doesn’t mitigate the risk of all types of credit card fraud, namely those involving card-not-present transactions,” Woolsey said.

The investigative research involved multiple data sources, including retailer interviews, forum member survey results, mystery shopping exercises and publicly available information. The study also found anecdotal evidence suggesting a majority of those retailers who were not fully compliant did have the relevant EMV-compatible equipment, but had operational reasons for not processing chip card payments at the point of sale according to the new standard.

“It is likely a combination of factors leading to voluntary non-compliance, not least of which is the substantial cost involved in transitioning to new point-of-sale equipment, as well as employee training costs and updating back-end processes and technologies. Feedback from some merchants has been that the custom software they use can be difficult or expensive to integrate with the chip reader. Others I suspect are just dragging their feet,” Woolsey said.

CreditCardForum’s analysis found that companies with retail sales of more than $36 billion in 2014 were statistically more likely to be 100 percent EMV-compliant than those with annual retail sales of between $19.8 billion and $35.9 billion, with Costco (the nation’s fourth largest retailer) and Safeway (the ninth largest retailer) the only two of the top 10 that are currently not fully compliant.

By contrast, seven of the next 10 largest retailers are not 100 percent compliant, namely McDonald’s, Publix, Ahold USA, TJX, H-E-B Grocery and YUM! Brands. Sears Holdings indicated plans to be fully compliant by the end of June 2016.

With the exception of Kroger, none of the regional grocery store chains are fully compliant. Additionally, all but one of the big box stores (e.g. Best Buy, Target and Wal-mart) and pharmacy stores (CVS, Rite Aid and Walgreens) are fully compliant. Kmart is an exception, as part of Sears Holdings, it is expected to be compliant by the end of the second-quarter 2016.

About CreditCardForum
CreditCardForum is the premier one-stop resource for and by consumers seeking in-depth information, opinions and advice on credit cards that also allows for immediate comparison and application to preferred cards.

Since 2008, the site has been the leading online community dedicated to consumer-driven education on the credit card industry. The user-contributed forum is enhanced by a hosted blog that covers latest industry developments that help consumers make more informed decisions regarding their credit cards. It also serves as a repository for key market data from multiple sources that provides a snapshot of the industry, backed by experts in the financial services and banking arena.

CreditCardForum is the go-to site for thousands of credit-card users each week seeking information and constructive peer-to-peer engagement with the aim of strengthening their financial bottom line.