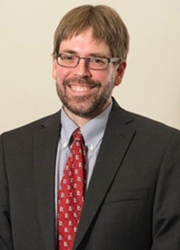 Dr. Shoemaker is a distinguished academician who possesses the experience, portfolio and vision needed to effectively lead the University.

Seton Hall University recently announced the appointment of Dr. Peter W. Shoemaker as the new dean of the College of Arts and Sciences, effective July 1, 2016.

"Dr. Shoemaker is a distinguished academician who possesses the experience, portfolio and vision needed to effectively lead the University," said Larry A. Robinson, provost and executive vice president, in making the announcement.

A scholar of 17th century French literature and culture, Dr. Shoemaker is the author of over 15 peer-reviewed journal articles and two scholarly books. Areas of special interest include rhetoric and literature, the social history of literature, the novel and the Moralists. He received his Ph.D. in Romance Languages and Literatures from Princeton University in 1997, where Dr. Shoemaker was a Jacob Javitts Fellow and the recipient of a French Government Fellowship (Bourse Chateaubriand) that enabled him to study at the Ecole Normale Supérieure in Paris from 1994 – 1995. He also holds an M.A. in Romance Languages and Literatures from Princeton and a B.A. in French from the University of Chicago.

Dr. Shoemaker is currently serving as vice provost and dean of Undergraduate Studies, director of the University Honors Program and associate professor of French at The Catholic University of America (CUA). His collective responsibilities have included several aspects of academic administration and strategic planning, including initiatives and programs designed to improve retention of first-year students, review of the general education curriculum and assessment of student learning outcomes. In addition, Dr. Shoemaker has worked collaboratively with faculty, staff and students across The Catholic University of America campus to develop a sustainability program and agenda that includes an experiential component for students.

Prior to joining The Catholic University of America community in 2000, Dr. Shoemaker taught at Princeton University and Macalester College. As a member of the CUA faculty, he taught numerous courses in French language, literature and culture at both the undergraduate and graduate levels, as well as the University’s Honors Program, and was the recipient of a Provost’s Award for Excellence in Teaching in 2006 – 2007.

One of the country’s leading Catholic universities, Seton Hall University has been developing students in mind, heart and spirit since 1856. Home to nearly 10,000 undergraduate and graduate students and offering more than 90 rigorous majors, Seton Hall’s academic excellence has been singled out for distinction by The Princeton Review, U.S. News & World Report and Bloomberg Businessweek.

Seton Hall, which embraces students of all religions, prepares its graduates to be exemplary servant leaders and global citizens. In recent years, the University has achieved extraordinary success. Since 2009, the University has seen record-breaking undergraduate enrollment growth in addition to an impressive 95-point increase in the average SAT scores of incoming freshmen. In the past decade, Seton Hall students and alumni have been awarded nearly 20 Fulbright Scholarships as well as other prestigious academic honors including a Rhodes Scholar. In the past five years, the University has invested more than $134 million in new campus buildings and renovations. And in 2015, Seton Hall announced plans for a new School of Medicine as well as launched a new College of Communication and the Arts.