Thirty-four years after its initial publication,. L. Ron Hubbard’s timeless science fiction classic Battlefield Earth has once again burst onto the sales charts, soaring to the top of the bestseller lists. 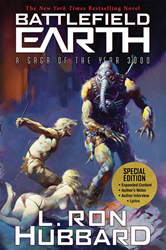 Thirty-four years after its initial publication, L. Ron Hubbard’s timeless science fiction classic Battlefield Earth has once again burst onto the sales charts, soaring to the top of the bestseller lists.

Battlefield Earth captured the #1 book slot across the board at Barnes & Noble and Books-a-Million, as well as ranking #1 in science fiction & fantasy at Amazon.com this past week.

International bestselling author Jim Marrs (Alien Agenda, Crossfire, and Rule by Secrecy) was recently interviewed by CBS 46 in Atlanta why Battlefield Earth was such an important read, Marrs responded, “It’s a rollicking good story. It gives you a whole broad spectrum of various issues about are we prepared for an alien contact or are we prepared for an alien invasion.” Marrs went on to state, “Steven Hawking recently said maybe we shouldn’t be sending space probes out there with maps of where we are because we might be drawing someone in that we might not want to have contact with. We need to start thinking of ourselves as citizens of the Galaxy and I think that L. Ron Hubbard’s book, Battlefield Earth, kind of typifies that and gives us a good starting point.”

When asked how the story was still relevant 30 years later, Marrs simply responded, “Well for one thing, it’s just a good story. And a good story is always good.”

Get more information on Battlefield Earth and L. Ron Hubbard at http://www.BattleFieldEarth.com and http://www.GalaxyPress.com and follow @BE_The_Book on Twitter.