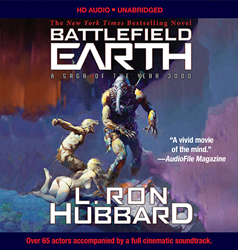 What do you get when you mix 67 top Hollywood actors with L. Ron Hubbard’s internationally acclaimed best-selling novel, Battlefield Earth: A Saga of the Year 3000? You get America’s #1 selling audiobook as just announced by Publishers Weekly.

“The sheer scope of this production of the epic sci-fi adventure Battlefield Earth is breathtaking,” stated Rudnicki. State-of-the-art audio engineering created a wholly cinematic soundtrack including full orchestral musical compositions combined with more than 150,000 sound effects to create a captivating reality. He went on, “Kudos to Galaxy Press who had to invent recording techniques, and in fact, ways of being, to make this happen.”

Battlefield Earth is a swashbuckling science fiction saga of adventure, daring, and courage, when man is an endangered species and the future survival of what's left of the human race is at stake. For more information on the Battlefield Earth audiobook, go to http://www.BattlefieldEarth.com .

Audiobook samples can be heard on SoundCloud at https://soundcloud.com/galaxy-758021182

Read and listen to samples and get more information on Battlefield Earth and L. Ron Hubbard at http://www.BattleFieldEarth.com and http://www.GalaxyPress.com and follow @BE_The_Book on Twitter.

'Battlefield Earth' is the #1 audiobook in America, as listed by Publishers Weekly.