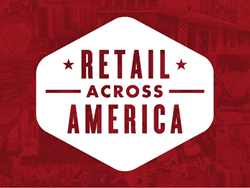 For us, running a healthy business is all about how we treat our employees and the impact we have on our community.

Local Gilsum retailer W.S. Badger Co. Inc., the maker of certified organic and truly natural skin care products, was recently featured in the National Retail Federation’s (NRF's) Retail Across America video series. The Retail Across America series, part of NRF’s award-winning This is Retail campaign, aims to highlight the industry’s economic impact across the U.S. NRF’s film crew interviewed Badger and six other innovative and community-focused NH retailers to create videos that depict their impact across the state’s communities.

“In New Hampshire, we captured some of the industry's most inspiring and powerful retail stories from hardworking and dedicated retail business owners,” NRF President and CEO Matthew Shay said. “These stories are a testament to New Hampshire’s retail legacy and highlight innovative companies that demonstrate the versatility and diversity of the industry and contribute to their communities every day.”

In Company Culture at Badger Balm, NRF showcases the company’s unique employee programs, such as Babies at Work and free organic lunch served daily, as well as its B Corp efforts.

“For us, running a healthy business is all about how we treat our employees and the impact we have on our community,” says Rebecca Hamilton, co-founder and VP of Product Development at Badger. “We have been family run and family friendly since our founding in 1995. As we’ve grown, we’ve really wanted to keep our mission and values close and becoming a certified B Corp and NH Benefit Corporation allowed us to do so in a purposeful way.”

According to NRF’s Retail’s Impact study, there are an estimated 219,277 jobs supported by retail in New Hampshire, roughly one in four jobs in the state. With 18,467 retail establishments across the state, retail contributes $12.2 billion annually to New Hampshire’s economy.

New Hampshire is the first state to be featured in NRF’s Retail Across America campaign in 2016 and the 17th since the campaign began in 2014. NRF is the world's largest retail trade association, representing discount and department stores, home goods and specialty stores, Main Street merchants, grocers, wholesalers, chain restaurants and Internet retailers from the United States and more than 45 countries. Retail is the nation's largest private sector employer, supporting one in four U.S. jobs - 42 million working Americans. Contributing $2.6 trillion to annual GDP, retail is a daily barometer for the nation's economy. NRF's This is Retail campaign highlights the industry's opportunities for life-long careers, how retailers strengthen communities and the critical role that retail plays in driving innovation. http://www.nrf.com.

About W.S. Badger
Badger is a family run and family-friendly company that has been making products for a healthy planet since 1995. Badger was born when Badger Bill, a carpenter at the time, created a recipe of natural ingredients strong enough to soothe his rough, dry cracked hands. Now a team of over 70 employees, Badger produces almost all of its products in Gilsum, N.H. Inherent in Badger’s DNA is its status as a B Corporation, a certification earned through B Lab, a third party nonprofit that requires companies to meet rigorous standards of transparency as well as environmental and social performance. Badger has been a certified B Corp since 2011 and in 2015 became one of New Hampshire’s first businesses to register legally as a Benefit Corporation, a for-profit status that incorporates the pursuit of positive environmental and social impact in addition to profit. http://www.badgerbalm.com