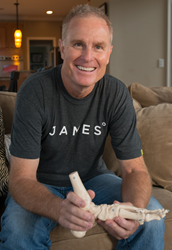 “The good news is that even after clinical damage has been done, a program that stretches the calf and Achilles tendon can eliminate pain and even reverse the damage,” Amis says.

Cincinnati orthopedic surgeon James Amis, MD, says a majority of foot and ankle conditions are caused by equinus--tight calves-- and can be treated definitively without surgery-- by daily calf stretching.

Amis offers his patients a simple and noninvasive solution that has helped up to 65 percent of his patients avoid surgery over his 30-year surgical career: calf stretching.

An article Amis has written titled, "The Split-Second Effect: The Mechanism of How Equinus Damages the Human Foot and Ankle,” will be published July 27 in Frontiers magazine, one of the world’s largest and fastest-growing peer-reviewed, open-access publications for scientists and researchers.

“Evidence clearly indicates that 95 percent of plantar fasciitis cases can be resolved at the source of the problem,” says Amis. “And the source of the problem is that calves have contracted over the years. Calf contracture is destructive to the human foot and it does not have to be that way. I am telling a completely new and different story here. This is a critical concept.”

Both surgical and non-surgical treatment today for non-traumatic, acquired foot and ankle problems are wrongly focused on the obvious foot or ankle problem themselves, says Amis. This includes plantar fasciitis, Achilles tendon injuries, Morton’s neuroma and even stress fractures.

“But tight calves are causing the problems and stretching the calves alleviates the problems. Few of the doctors who agree with my theory believe in calf stretching. They all too often choose to perform surgery to lengthen the calf or Achilles. I choose calf stretching.”

Nationally, foot and ankle surgeries are an annual $11 billion business, according to medical researchers K. B. Tong and J. Furia. Treatment for plantar fasciitis alone is a $1 billion-plus industry, say researchers D. A. Belatti and P. Phisitkul.

There’s been little emphasis in medical literature on how biomechanical mechanisms can create a damaging effect in the foot and ankle, says Amis. “For this reason, few of my peers share my conviction that the calf is the actual problem. Yet these same few doctors schedule surgery to lengthen the Achilles tendon to alleviate foot pain. They generally think calf stretching does not work because the literature does not encourage it, even though the evidence does.

“Additionally, their experience is that physical therapy generally does not statistically work, and they are correct. Physical therapy may do the right things, but patients typically stretch perhaps only 60 seconds a day, three times a week for six weeks. That is not nearly enough time to fully lengthen the calf muscle. It’s no wonder patients undergoing physical therapy for these problems tend to fail.”

Amis recommends patients stretch their calves fully three minutes per day, three times in succession for a total of nine minutes per day—every day-- for the rest of their lives.

“The good news is that even after clinical damage has been done, a program that stretches the calf and Achilles tendon can eliminate pain and even reverse the damage,” he says.

Amis developed a medical device in 2011 called One Stretch, which looks like a curved footstool and helps patients stretch their calves. He retired from clinical practice in June as a member of the Department of Orthopaedic Surgery at the University of Cincinnati and surgeon at Good Samaritan Hospital, a TriHealth physician partner, and is moving to a position with Johnson & Johnson, DePuy Synthes Companies.

Amis contends that more than 65 percent of the non-traumatic acquired foot and ankle problems he has seen throughout his career arise from tight calves. He says most of these cases can be effectively treated with calf stretching because stretching treats the cause of the pain.

While no definitive data on the efficacy of calf-stretching to avoid foot and ankle injuries exists, he contends that these same problems can be prevented and warrant further investigation.

Research on this subject bears out his observations. As early as 1913, John Nutt made a correlation between tight calves and Achilles tendon tightness. David Porter headed a 2002 study that determined calf stretching for six months after heel pain begins increased Achilles tendon flexibility and could help patients avoid surgery.

Amis says his Frontiers article shows the mechanism of damage exerted by calf contracture on a review of existing literature on the subject; observations during his 30 years of clinical and orthopedic foot and ankle experience; and examination of many hours of slow-motion video of normal and abnormal human gaits.

If your calves are too tight, so is your plantar fascia, says Amis. “Both are connected through the calcaneus, or heel bone. The plantar fascia, the flat band of tissue that connects your heel bone to your toes, tends to be the weak link and can get strained, chronically inflamed and generally irritated. This can be experienced as pain in the bottom of your foot or heel when you stand or walk. It’s all connected.”

He says what the majority of his orthopedic surgeon colleagues don’t understand is that over time, a too-tight calf can have far-reaching negative effects on the foot and ankle, causing increased mechanical stress on bones, joints, tendons and ligaments.

Amis admits that his advocacy for calf-stretching is disruptive to the orthopedic surgical community as well as patients, but says he is dedicated to patient recovery, not surgery.

As we age, calf tightness is almost inevitable, says Amis. Several reasons why it occurs are that we become more sedentary as we age and have less daily stretch of the calf muscles; age decreases the elasticity in calf connective tissue; and high-heeled shoes shorten the calf, which tends to stay short over time.

Even athletes or runners who use similar stride lengths consistently while training may not stretch their calves to full extension and become subject to Achilles tendon inflammation and plantar fasciitis, says Amis.

“Patients come to me and say they have tried everything: physical therapy, orthotics, rest, immobilization, injections, and non-steroidal anti-inflammatory medicines—even acupuncture,” he says. “And they are right. But they have not tried the one thing most likely to help: calf stretching.

“While those treatments may help with symptoms, none correct the actual cause, which is that your calf is too tight; therefore, relief from those treatments is not usually long-lasting,” says Amis. “No wonder people have such a hard time eradicating plantar fasciitis.”

To read the full text of Amis’ Frontiers article, visit http://www.onestretch.com or go to the Frontiers website at /bit.ly/1tAEUM1.

One Stretch is a medical device developed by Dr. James Amis, an orthopedic surgeon who studied patient foot and ankle problems over his 30-year medical career and deduced that many common foot and ankle problems occur because of tight calves. He found that 65 percent of his patients could avoid surgery by engaging in calf stretching for nine minutes per day. The One Stretch is available for sale at http://www.amazon.com.

Calf stretching with the One Stretch. (Image Provided)

Stretching and relaxing with a friend. (Image Provided)

One Stretch can be a part of your daily workout. (Image Provided)

All ages can use the One Stretch. (Image Provided)

The One Stretch is light and portable. (Image Provided)

Dr. Amis in a home gym with One Stretch. (Image Provided)