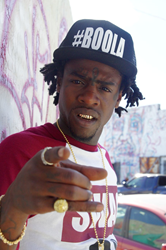 “My clients claim in the lawsuit that they had no intention of the video being released to the public,” said Wolfe. “According to the complaint, my clients said they had no knowledge of how the defendants obtained the video."

Prominent litigation attorney Richard Wolfe announced that he has filed a lawsuit on behalf of Rubin McFadden, a rapper who performs under the name Khaotic, and Nina Allimpic, a female acquaintance, against one of the internet’s most popular urban blogs World Star Hip Hop (WSHH) and its owner Lee Q. Odenat, professionally known as “Q.” According to the lawsuit filed in Miami-Dade Circuit Court (Case No. 16-017727 CA 01), WSHH posted a 45-second personal private-taped video depicting McFadden and Allimpic engaged in consensual sexual relations in a private bedroom. The video received more than 350,000 views and more than 4850 people made public comments about the video, Wolfe added.

“My clients claim in the lawsuit that they had no intention of the video being released to the public,” said Wolfe. “According to the complaint, my clients said they had no knowledge of how the defendants obtained the video, as the video was only stored on McFadden’s personal cellular phone.”

Str8Drop Recording Artist Khaotic (McFadden) is an emerging rapper, singer, songwriter, and entertainer who is popular in the Miami scene and other urban markets around the nation. According to the lawsuit, numerous websites and media outlet picked up the video posted on WSHH, republishing and posted links to the video further exposing hundreds of millions of people to the video.

In the court documents, McFadden and Allimpic claim to have suffered embarrassment, humiliation, and paranoia as a result. The lawsuit charges WSHH with alleged invasion of privacy, defamation, and intentional infliction of emotional distress. The plaintiffs are seeking a jury trial to award compensation of damages in excess of $15,000.

“My client has devoted time and effort developing his career, reputation and brand,” said Wolfe. “These efforts have created commercial value in his name image, identity and persona.”

The video has been removed from the WSHH website.

Photo: KhaoticThis is a photo of Rubin McFadden, known in the entertainment industry as the rapper "Khaotic."