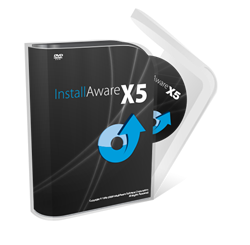 Brand-new in InstallAware X5 is a full implementation of Microsoft’s Project Centennial. Developers preserve all of their investment in their existing InstallAware setup projects and scripts by instantly building them as APPX packages targeting Microsoft’s Universal Windows Platform. Win32, Win64, and .NET apps are bridged effortlessly into the future, and all from a single source, using InstallAware X5.

The InstallAware X5 IDE, with brand-new touch controls, accelerated design views, and high-DPI support, is a pleasure to behold and a joy to work with across a very wide spectrum of devices – from hand-held tablets to ultra-high resolution flat displays. Just the same way that setups built with InstallAware are the most flexible, the InstallAware IDE is also the most productive and scalable; always offering two views of any setup project: Low-level script/code and high-level visual editors. Both views are always integrated, and changes made in one view seamlessly update the other; ensuring maximum productivity and customizability all at once. This level of flexibility is unmatched by neither the incumbent nor the challengers in the installation development space.

Application producers need to have confidence that their installer makes a positive first impression for their software, running properly on Microsoft’s ever growing number of Windows versions. InstallAware X5 is the only installer which produces a single package capable of installing on all Windows versions starting with 32-bit Windows XP, going all the way through to the very latest version of 64-bit Windows 10 Redstone. The intelligent scripting available in InstallAware X5 empowers developers to intelligently adapt their setup packages to each target platform while retaining a single code base and shipping a single setup package for all of their customer scenarios; seamlessly meeting customer demands, reducing support costs, and eliminating installer errors – a level of flexibility unavailable with any other installer.

InstallAware Software, founded in 2003, is the leading Cloud Infrastructure Company with its laser sharp focus on bullet-proof enterprise software deployment. InstallAware has been recognized by multiple awards coming from Microsoft, SDTimes "Leader of the Software Development Industry", Visual Studio Magazine Reader's Choice, ComponentSource, WindowsITPro, among other recognition. InstallAware X5 is available in a free edition for all Visual Studio users and paid editions with prices starting at $329. For a fully functional 30 day trial and more information, visit http://www.installaware.com.