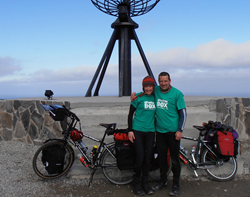 Tim and Sharon have been an inspiration to countless people along the way with their story of hope, loss, courage, and fortitude.

In ShelterBox’s history there has been nothing even remotely like it. A husband and wife cycling team, circumnavigating the globe across four continents. But then tragedy struck on a lonely road in Bolivia in April 2014 when Sharon Bridgman died after a vehicle collision.

Tim Bridgman and his wife Sharon had a personal dream, to cycle the world crossing four great land masses. They would start in Norway, travel south through Europe and Africa, then from the tip of South America head north again, crossing Central America and the USA, aiming to re-enter the Arctic Circle at Alaska. This North2North journey, as they named it, would mean a 37,000 mile cycle through 32 countries, every mile covered to benefit ShelterBox, the international disaster relief charity.

But the Bridgmans’ dream turned to nightmare as they neared the Chilean border on Bolivia’s barren Uyuni salt flats. Sharon was in a fatal collision with the only vehicle they had seen that day. That was in April 2014.

Tim says, ‘The accident reminds you that you can lose all that in an instant. Mentally I needed to go back and finish what we started. After Sharon’s death I went back home and wasn’t prepared to be back there without her. I had left my bike in Bolivia because I knew that I would be back.’

Now, having completed the remaining 15,000 miles on his own, Tim Bridgman crossed the finishing line last week at Prudhoe Bay in Alaska. It was a bittersweet moment. He told i newspaper’s Genevieve Roberts, ‘Sharon had every bit of strength I did and she should have been there too. I took a bottle of bubbly, but didn’t feel like jumping with joy.’

Nancy Dodge, a ShelterBox ambassador in Alaska, joined Tim for the last leg, helping to sort permissions to cross the oil fields. Together they put up a ShelterBox tent on the shores of Prudhoe Bay, certainly the most northerly site ever used in the charity’s 16 year history. He and Sharon have managed to raise an astonishing $38,000 in the US plus £20,000 overseas for the charity’s disaster relief work. Tim is being joined in Alaska by friends from England, and will take a vacation with them before returning home. 'Tim and Sharon have been an inspiration to countless people along the way with their story of hope, loss, courage, and fortitude. We are honored by their dedicated effort and congratulate Tim for completing his journey,' said ShelterBox USA president Kerri Murray.

Tim says, ‘What compelled us around ShelterBox was that it didn’t matter who you were, where you came from, the organization helps people who have lost everything in an instant. So many charities waste money and resources, and you never really know where the donations are going. But with ShelterBox, you see so many people around the world who have lost everything in a crisis, benefiting from the work of the organisation.’