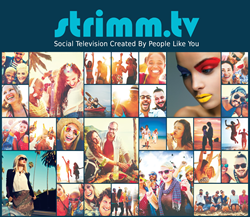 Social Internet TV is a revolutionary medium not just because it's new, but because it will unprecedentedly empower millions of creative people to express themselves.

Social Internet Television -- where ordinary people and organizations can create their own TV channels -- represents the Internet's latest new frontier for social communications and entertainment. Strimm TV, an emerging leader in this sector, announced today that it has surpassed the 300 mark for Internet TV channels created by users from over 100 countries worldwide, and it now features 355 constantly broadcasting TV channels created by everyday people. And those numbers are growing rapidly.

Strimm's Max Stolyarov, expressing pride in the young company's latest achievements, said: "Our unique social television platform fuses cable-TV-like features and services with Internet cloud computing. As such, it represents the birth of a new paradigm on how regular people and organizations alike can use these mediums for social communications, entertainment, education and commerce."

"Social Internet TV is a revolutionary medium not just because it's new, but because it will unprecedentedly empower millions of creative people to express themselves in a fuller, richer manner than they could before," he added. "And Strimm TV's unmatched capabilities will clearly place it at the forefront of this exciting new medium."

"Whether you're a technically unsophisticated everyday person or a complex business, it's remarkably easy to create a channel on Strimm TV, add content and choose the day and time for a scheduled broadcast," explained Strimm's Elina Berg. "Strimm’s platform provides a set of advanced tools for users to find content for their created channels directly on the Strimm platform, and to then utilize the platform to create scheduled broadcasts. Users are of course free to create and employ their own video content."

Strimm is connected to multiple free video providers like Youtube, Vimeo and Dailymotion. Direct hosting capability will be available soon, according to the company. The online TV stations can be created in different languages and a multitude of categories -- such as music, sports, fashion, gaming, food, kids, education, travel, technology, etc.

Strimm's Elina Berg stressed that, with Strimm, any business or organization can now have their own TV station -- "which can bring their external relations, marketing and communications to a whole new level.

"We now allow organizations to embed a Strimm TV station onto their websites, and to allow broadcasts from there, while the TV scheduling is done on the Strimm platform," she explained. "Organizations can use their own videos or find niche-related content directly on Strimm -- and the embedding options also include white-label capability (the Strimm logo removed), which helps the blending process."

"There are virtually limitless possibilities for finding niche-related topics and videos for a business or organization. " said Max Stolyarov. "Our goal is to give an extra choice to users in their world of entertainment and communications -- and to allow them to create and affect what they watch on a day-to-day basis without being a passive user. This will be a niche service that allows people worldwide to be TV program creators and viewers simultaneously."

Strimm TV (http://www.strimm.com) is an online social television platform that offers a new era of customized Internet television, accessible from anywhere at any time on any device. It provides viewers with hundreds of free 24/7 broadcasting TV channels in a variety of categories, created by individuals and organizations from around the world. Follow us on Facebook, and join our community of over 55,000 followers.