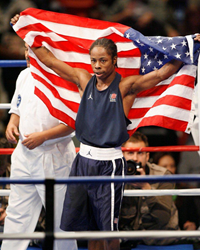 The Olympic Games hold a special meaning for the many Premier Boxing Champions series boxers who competed in past Olympiads. Representing the United States, Mexico, Haiti, Russia, Great Britain and more, it served as the highest achievement of their amateur careers before they embarked on professional championship aspirations. Starting Friday, an honored group of fighters that represented their homes as Olympians salute the members of the 2016 Olympic Teams on their achievements and wish them all the best in bringing home the gold. To view go to: http://www.premierboxingchampions.com and http://www.facebook.com/premierboxingchampions.

In a series of special video vignettes and articles on the Premier Boxing Champions website, previous Olympians like heavyweight world champion Deontay Wilder (Bronze medal winner in 2008 Beijing Games); Rau’shee Warren, the only U.S. boxer to participate in three Olympics (2004, 2008 and 2012); and Errol Spence (2012 London Games) will offer encouragement to members of the 2016 U.S. Olympic boxing team. Warren and Spence will reminisce about their Olympic experiences together.

Gary Russell, Jr. (2008 Beijing Games) will talk about his experience in the Games and also discuss his brother, Gary Antuanne Russell, who is a member of the 2016 U.S. Team in Rio, when the Olympics kick off on Aug. 5. Andre Dirrell was a bronze medalist and teammate of Russell in the 2008 games.

Terrell Gausha (2012 London Games) will have some helpful tips for the members of the U.S. boxing team on how to maneuver through the Olympic maze and succeed in securing gold medals. Marcus Browne and Jamel Herring were also teammates with Gausha on that 2012 Olympic team.

To check out the videos and articles on the PBC boxers and their Olympic experiences go to http://www.premierboxingchampions.com/

The series runs through the entire length of the games.