Working Hard For The Money: New Study Reveals That Greed Does Not Always Motivate Desire For Financial Reward

New study by Psychtests.com reveals that employees who are strongly motivated by money are also inspired by other, more “wholesome” values like the desire to inspire and to create. 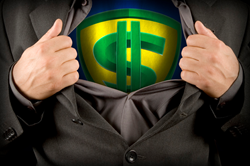 Being driven by money isn’t always a bad thing.

Employees who list money as one of their top motivators do not rely solely on financial reward to fan their flames of productivity.

Money carries a seemingly indelible stain on it, owing to the belief that it is the “root of all evil.” Thus, when a job candidate firmly requests a specific minimum salary or an employee asks for a raise - or quits to seek greener pastures - many employers may interpret it as a move driven by greed and selfishness.

Research from Psychtests.com, however, indicates that employees who list money as one of their top motivators do not rely solely on financial reward to fan their flames of productivity. In fact, not only are they inspired by several other work motivators, they also tend to have better performance ratings than people who are not motivated by money.

Reviewing data from 1,194 people who took their Career Motivation Test, researchers at PsychTests analyzed the motivation pattern of two particular groups: People who are strongly motivated by money and those who are not. What they discovered was that the two seemingly distinct groups actually shared seven of their top ten motivators, including:

IDENTITY & PURPOSE
(Note: Scores can range from 0 to 100. The higher the score, the more important and inspiring the motivator).

For people inspired by this motivator, their career is more than just a job. They want to be in an occupation that adds meaning to their life, and gives them something to strive for, to look forward to, and to push them out of bed every morning. Those inspired by Identity and Purpose invest their time, energy, heart, and soul into every task and project they take on.


Those with a customer orientation are highly motivated by happy customers. They place a great deal of importance on fulfilling customer needs, delivering on promises, and treating customers with respect and dignity. They will go that extra mile to ensure a customer is satisfied with a product or service.


For those inspired by this motivator, what they are doing with their life is not as important as whether they enjoy doing it. They are more than willing to work hard, but want a job where fun and hard work can coexist. Job fit is especially crucial for people motivated by fun and enjoyment, or they risk boredom and a lack of productivity.


Individuals driven by achievement thrive on the sense of satisfaction that comes with reaching their goals or rising up to meet a challenge. They are typically motivated by the opportunity to move up the ladder, and want to excel in their chosen endeavor – being an entry or low-level employees just isn’t enough. They may become bored or restless if they feel their career is not following an upward trajectory.


Being able to inspire others, either through creative means (artwork, literature) or by opening minds to new ideas (through teaching, coaching, etc.) matters a great deal to people with this motivator. They want to affect people in some way, and move them or experience something they never have before. They want to be the catalyst that initiates change, new ideas, or new creations.


Individuals with this motivator are driven by the desire to gain knowledge and learn new skills. They are generally very curious, enjoy intellectual stimulation, and enjoy the feeling of being an expert in certain topics as well as staying on top of developments in their area of expertise.


People motivated by creativity want nothing more than to express their originality, which may be through typical creative endeavors (art, writing, design), or by coming up with innovative approaches or solutions in work settings. They tend to have an innovative approach to their work and may feel stifled in jobs where the tasks they work on do not allow them to stretch their creative wings.

So how do they differ? Employees who are not motivated by money also ranked Altruism (desire to help others), a Balance Lifestyle (desire to lead a fulfilling life outside of work) and Independence (ability to make their own decisions, their own schedule, and work at their own pace) as important motivators. On the other hand, those who are money-motivated are also driven by Power (desire to be in a position of leadership), Recognition (desire to be appreciated and rewarded for hard work), and Structure (preference for routine, schedules, and an established system for completing tasks).

“There may be a misconception among managers that if an employee is motivated by money, then no other motivators or forms of recognition/appreciation will do. According to our study, however, this simply isn’t the case,” explains Dr. Jerabek, president of PsychTests. “Not only are financially driven employees inspired by other, arguably more ‘wholesome’ motivators, like creativity and learning, those in our study also had better performance ratings, with 59% ranked as a good performer vs. 41% for non-money oriented employees. The bottom line that managers need to understand is that motivational needs cannot be resolved with a one-size-fits-all solution. Furthermore, being driven by different types of motivators provides managers with a wider pool of motivational options. That means that non-monetary rewards, like praise or the opportunity to lead a project, can be just as valuable to an employee as a significant financial bonus.”

Want to determine your career motivators? Check out http://testyourself.psychtests.com/testid/3153

The desire for money isn’t necessarily motivated by greed.Employees who are driven by money and those who are not differ significantly on other work motivators as well.