Mina Fies, CEO of Synergy Design & Construction, Named 2016 “Made it to a Million” Femtor™ Award Finalist 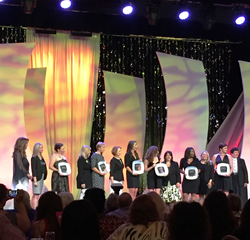 Connecting and empowering other like-minded women, only fuels our success, and positively impacts the overall health of our economy.

Mina Fies, Founder and CEO of Synergy Design & Construction, a design-build firm located in Reston, VA, was named a finalist in the “Made it to a Million” category at the eWomenNetwork 2016 International Femtor™ Awards Champagne Luncheon, held in Dallas, TX, on August 6. The International Femtor Awards are one of North America’s most prestigious award honors. Each year nominated leaders are selected to be recognized for their outstanding achievements and the role they play in elevating the stature and well-being of women.

“Today we are surrounded by the most daring and innovative women entrepreneurs of all time. It is our duty to seek out and empower these women to reach their goals and go beyond what they think is possible. I am both honored and humbled to be recognized as a Femtor finalist.” said Mina Fies, CEO of Synergy Design & Construction. “Connecting and empowering other like-minded women, only fuels our success, and positively impacts the overall health of our economy.”

According to the National Association of Women Business Owners (NAWBO), more than 9.1 million businesses in the United States are owned by women, but only 4.2% of those businesses have revenue’s of $1 million or more. eWomenNetwork chose Mina because she not only reached that elusive benchmark, but did in a male-dominated field during the very difficult economic circumstances of 2008.

“It has been wonderful to watch Mina’s progress over the years. Her vision and determination to change the home remodeling industry for the better is inspiring,” said Meredith Liepelt owner of Rich Life Marketing and member of eWomenNetwork “I know her passion and determination will continue to propel her success and I can’t wait to see what she comes up with next.”

The 2016 International Femtor Awards Champagne Luncheon was hosted as part of the eWomenNetwork 16th Annual International Conference & Business Expo. The sold-out event was attended by more 1,000 women entrepreneurs from all over the United States and Canada.

About Mina Fies
Mina Fies is CEO of Synergy Design & Construction, a woman-owned design-build home remodeling company based in Reston, VA. Launched at the height of the 2008 recession, her against-all-odds success story has garnered her, and her company, local and national recognition, several Master Design and Contractor of the Year awards, and features on NPR and HGTV. Her commitment to developing innovative strategies for remodeling success includes the development of her proprietary project management system (The Renovation Roadmap™). Mina is also an author and speaker, delivering informative and interactive workshops that help people take control of the space that surrounds them.