For the first time ever, the WPC will have its own Art Walk, showcasing art by members of the Parkinson's community. 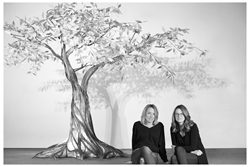 From September 20 to 23, Portland is going to be Parkinson’s ready as it greets more than 4,000 participants in this year’s triennial meeting of the World Parkinson Congress (WPC 2016). Part of the WPC experience includes an “Art Walk”, where participants and the public can view works of art from around the world, each specifically couched in the unique perspectives of Parkinson’s disease by the contributing artists.

“We encourage all participants at the Congress to take this walk, and enjoy what others say about Parkinson’s disease through their art,” states Elizabeth (Eli) Pollard, executive director, World Parkinson Coalition®. “We think you’ll find what they have to say moving, compelling and educational. We in the Parkinson’s community already know the power of creativity, and want the rest of the world to understand it as well.”

The Forging Resilience Art Installation, designed by Montanan artists, Carolyn Montgomery and Hadley Ferguson, brings together thousands of journeys of resilience from the global Parkinson's community. The installation features a 10-foot metal tree, which is lit from within and holds thousands of copper and paper leaves. Each leaf shares a quote or message from someone in our world living with or impacted by Parkinson’s. By sharing their stories and quotes, contributors to the project inspire, connect and help to build our tree of resilience. In combination with the tree sculpture, the artists are also featuring environmental portraits with personal stories of resilience.

The Parkinson's Quilt Project, hosted by the Parkinson's Foundation, PDF Division, is the first global quilt project to focus the world's attention on the nearly one million people in the US and seven to 10 million people worldwide living with Parkinson's. The project aims to raise awareness of the impact that the disease has on people living with Parkinson’s – along with their families, caregivers and friends – and on our continued urgency to find a cure. More than 600 people have contributed 2’x2' panels to create the 41 quilts.

From its modest beginning to nearly 10,000 delegates who have participated in the previous triennial Congresses, the WPC 2016 is expected to attract more than 4,000 delegates. To learn more about the 4th World Parkinson Congress, please visit: http://www.wpc2016.org/