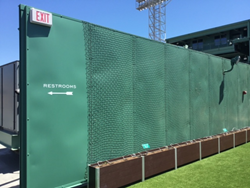 “We were very pleased with the success of the Fenway Park project. We have solved many chiller and mechanical noise issues in different industries with our patented All Weather Sound Panels," said Lahnie Johnson, President & Founder of Acoustiblok, Inc.

Acoustiblok’s All Weather Sound Panels® were installed at Boston’s famous Fenway Park to resolve noise issues from a chiller and other mechanical equipment in an exclusive outdoor function area. The All Weather Sound Panels were used to create an absorption barrier which dramatically reduced the noise. Sounds meter results showed 81dB inside the enclosure and 64.4dB outside of the enclosure, a reduction of over 16dB (a 10dB decrease in sound is perceived as half the amount of reduced sound to the human ear). The panels were later painted to match the park’s color scheme.

Acoustiblok was contacted by Fenway Park when they decided to take some unused deck space and create an outdoor function area that could be used by groups. Half of the deck area was used for a chiller and some mechanical equipment that was noisy and needed sound abatement. After reviewing their options they decided on Acoustiblok’s All Weather Sound Panels (AWSP’s) because it was the best product that meet their needs: AWSP’s are cost effective, easy to install, attractive panels with advanced soundproofing capabilities.

The project was started February 2016 and completed several months later in May. The space is designed for groups to rent and is currently named the “Jeano Deck”. It was inspired by the adjacent Fenway Farms created in 2015, with a natural theme that includes tables, chairs and other outdoor furniture along with plants and other flora. It’s quite spacious and can handle up to 200 people with easy access to an elevator and stairs.

Acoustiblok’s 4-foot x 10-foot All Weather Sound Panels were used on the project; 19 in total. After the panels were installed, they were painted to blend in with the background and the home run netting that had been taken down from the “Green Monster” was placed over them. They then planted vines in plant containers in front of the panels enabling the vines to grow up and eventually cover the panels creating a natural look to complement the neighboring Fenway Farms.

According to the Acoustiblok consultant on the project, the client was very happy with the results and if they have any future projects that require noise abatement, they will start with a call to Acoustiblok.

All Weather Sound Panels were originally designed and patented to withstand the harsh environments of offshore drilling rigs. The panels are typically 4’ x 8’ and 4’ x 10’, and are considered to be the strongest sound panels anywhere. The hurricane model is tested to withstand wind loads of over 270 mph (more than a category 4 tornado). They are entirely welded aluminum, washable, hydrophobic, UL STD 723 tested, and 0 smoke/flame. Easily stored, 50 panels can be stacked within a ten foot height. For mobile use Acoustiblok offers a caster attachment. And as all of Acoustiblok’s products, they are entirely made in the USA with all US materials.

“People with serious noise issues are finding out that there are many uses for this innovative sound isolation product. Besides chillers, All Weather Sound Panels have been used inside and out to quiet motors, pumps, generators, rail systems, airport conveyor systems, many types of machinery and more,” Johnson added.

Johnson concluded with saying, “We’re not just a sound abatement products company; we are a noise solution company. Since Acoustiblok’s inception the company has solved over 20,000 acoustical problems from all over the world. Our team of acoustical consultants is on the front line of this effort. Their collective experience in acoustics, building, construction, engineering, and different industries can usually resolve the most challenging of noise problems. Each problem tends to be unique and understanding the principles of acoustics and knowledge of the surrounding construction and/or machinery is vital.

"For complex problems, the company utilizes state-of-the-art acoustical tools such as CADNA-A acoustical prediction modeling software, and our new revolutionary Acoustical Real Time Acoustical Video Imaging System (ARTVIS®). The system can instantly show you all the noise sources visually. ARTVIS allows us to “see” sound in real-time (as you would “see” thermal contours with an infrared camera). This can save customers a lot of time and money rather than ‘try this’ solutions that may not work.”

Acoustiblok Inc. ships products to more than 50 countries through a network of stocking distributors in the United States, on five continents across the globe. http://www.acoustiblok.com

About Fenway Park
Fenway Park, a sports park in Boston, Massachusetts is home to the Boston Red Sox. The park was opened in 1912, and has been renovated or expanded throughout the years. Fenway is considered one the smaller parks (35,000 seats) with a long rich history. It is the oldest park in MLB and has hosted the World Series ten times. Other sporting and cultural events such as concerts, other professional sports games, as well as political and religious events are also hosted by the famous park.

With the different expansions came a few unique features, while quirky, give the park its well recognized character: “The Triangle”, found in center field left of the bullpen, 420 feet from home plate. The “Pesky Pole,” right field foul pole named after Johnny Pesky who played second base, shortstop and third base for the Red Sox 1942to 1952 (except war years). The “Green Monster”, the left field green wall (with a manually operated scoreboard) 37.2 feet high stretching 231 feet across. The park was added to the National Register of Historic Places in 2012 and is one of the best known sports parks in the world. For more information: http://boston.redsox.mlb.com/bos/ballpark/ or call (877) 733-7699.

All Weather Sound Panels inside enclosure