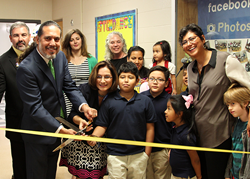 We are very excited to see our students get such an upgraded learning environment.

The ribbon has been cut on Phase 1 of Denver Public School’s (DPS) Swansea Elementary School Renovation project, officially welcoming students to the upgraded school. The project, designed by Anderson Mason Dale Architects, was constructed by Adolfson & Peterson Construction (AP) and Latcon Corp under a Mentor-Protégé arrangement.

Latcon is a Minority/Woman Owned Small Business who has worked with AP previously on multiple K-12 projects across Colorado. By pairing together AP and Latcon professionals across all levels of both firms, Latcon has been able to grow as a contractor, while giving DPS certainty from AP’s 70 years of nationwide experience as a premiere education builder.

“This is a big day for us,” said Reggie Garcia, President of Latcon. “The Mentor-Protégé program has been very helpful for Latcon in helping us grow and it’s a really positive feeling to know that we have been able to team-up with AP and the school district to make this dream come alive.”

Phase 1 of the project revitalized spaces throughout the school, including classrooms, hallways and the library. Future phases, which will be partially funded by the Colorado Department of Transportation (CDOT), are planned to add an addition to school, upgrade the mechanical and electrical systems and install high-efficiency windows throughout the facility.

“We have been working to make these very needed improvements to our outdated classrooms and it is really only possible because of the voters of Denver who approved the 2012 bond and mill program,” said Susana Cordova, Deputy Superintendent of DPS before reminding everyone to vote for the DPS bond and mill levy that will be on the ballot in 2016.

“Hearing the ‘oohs’ and ‘awes’ from the kids as they walked down the newly renovated hallways and the excitement in their voices as they saw their new classrooms for the first time made all of the hard work worth it,” said Tom Stone, Project Executive at AP.

One of AP’s first projects in Colorado was supporting the DPS 1971 bond measure, which included an addition to Swansea that was completed in 1974.

About AP
Adolfson & Peterson Construction is a U.S.-based, privately held firm that is consistently ranked among the top 50 construction managers and general contractors in the nation. Founded in 1946, the company has built longstanding commitments to the regions in which it operates and is known nationally for its innovative and collaborative approaches within the building industry. Adolfson & Peterson Construction serves the education, multifamily, healthcare, commercial, municipal and senior living market segments from its offices in Charlotte, Dallas, Denver, Minneapolis, Phoenix, Portland and Tacoma. For more information, visit http://www.a-p.com and follow us on Facebook, LinkedIn and Twitter.

About Latcon
Founded in 2013 by Brandelynn Montoya and Reggie Garcia, Latcon is a certified Minority/Woman Owned Business specializing in complex mechanical and electrical projects across the Front Range. Latcon offers full-service estimating and project management services with a devoted staff.