“The Christian Handbook of Survival” from Christian Faith Publishing author Silas Marshall is emboldening and impressive in the scope of understanding the passages bring to following the teachings of the Bible. 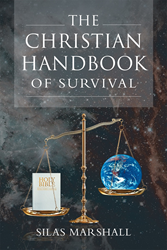 “The Christian Handbook of Survival”: a moving and inspirational guide to living the principles of the Bible. “The Christian Handbook of Survival” is the creation of published author, Silas Marshall, who was called out of darkness into God’s marvelous light over forty years ago. His call begins while he was in the music industry as a singer, songwriter, and producer of his own original works. All Silas wanted was to be a success within the music industry, but God had other plans for him. After his first five-year contract was coming to an end, he was offered another seven-year contract with the stipulation that Silas must forget “quote” that Jesus stuff, which threw him for a loop because he did not consider himself at that time to be religious at all. He wanted what most aspiring singer/songwriters wanted - success in the business, and that’s all he had on his mind. But when he heard these words come out of the attorney’s mouth, he was shocked, which made something rise up in him that he had never really thought about before. That was; if these rich and famous men hate Jesus so much, then he must look into who Jesus really was. He rejected their pretty good offer and did not sign the new contract. This action sent Silas on a forty-year journey to find out the truth that sets men and women free, and that truth was in Jesus the Christ.

Silas believes that “God wants to approve you (into heaven), but you must study like you’re studying for an exam or test in school. If you don’t do your homework and test time comes, you will most likely fail. God is much more forgiving and kind than most professors would be in this case, but God wants you to know who you are. He already knows, he just simply wants you to know who you are".

He continues, "This book was written to encourage you in your quest for eternal knowledge and to inspire you to pursue God with much passion, as you would if you wanted a husband or wife to live the rest of your lives with. It is with this same passion and desire for the Word of Truth that God delights in when he sees you studying to show yourself approved, a workman unto God, not being ashamed by rightly dividing the Word of Truth”.

All of the information that readers will find in "The Christian Handbook of Survival" comes out of the pages of the Bible. It’s all there in plain sight, but must be sought out diligently, by asking God to reveal understanding of the letter or road map to success in the Kingdom of God.

View a synopsis of "The Christian Handbook of Survival" on YouTube

Consumers can purchase “The Christian Handbook of Survival” at traditional brick & mortar bookstores, or online at Amazon.com, Apple iTunes store, Kobo or Barnes and Noble.

For additional information or inquiries about “The Christian Handbook of Survival,” contact the Christian Faith Publishing media department at 866-554-0919.