The Judgement Free Zone® is coming to Midwest City, Quail Plaza and Edmond 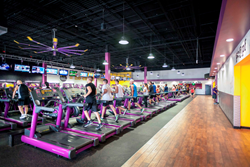 The clubs will feature a wide variety of equipment, including treadmills, ellipticals, arc trainers and stationary bikes.

These will be the most state-of-the-art clubs in the area. At only $10 a month for memberships, the value will be second to none.

Planet Fitness, the innovative health club franchise known for its Judgement Free Zone and affordable prices with memberships for only $10 a month, will be opening three new locations in Midwest City, Quail Plaza and Edmond, OK. All three clubs are slated to open in December of 2016, joining four other Planet Fitness locations already open in the Oklahoma City area.

The clubs will feature a wide variety of equipment, including treadmills, ellipticals, arc trainers and stationary bikes—all pointed at 70-inch televisions for member entertainment while working out. Planet Fitness also offers a popular 30-minute PF Express circuit room, dedicated abs and stretching room, a full complement of user-friendly strength equipment and full locker rooms that include free day-use lockers, private changing rooms and tile showers. “These will be the most state-of-the-art clubs in the area. At only $10 a month for memberships, the value will be second to none,” said Trey Owen, CEO of PF-TO Management, a leading Planet Fitness Franchisee Group that currently operates 25 locations across Oklahoma, Texas and Kansas.

Additionally, a Black Card® membership will be offered at $19.99 a month. It will include additional amenities such as the ability to bring a guest every day at no additional charge, access to more than 1,100 clubs in the Planet Fitness chain, as well as use of massage chairs*, HydroMassage beds*, tanning* and Total Body Enhancement booths*, and 50 percent off select cooler drinks.

*PF Black Card® amenities may vary by location but are included in Midwest City, Quail Plaza and Edmond.

About Planet Fitness
Founded in 1992 in Dover, N.H., Planet Fitness (NYSE: PLNT) is one of the largest and fastest-growing franchisors and operators of fitness centers in the United States by number of members and locations. With more than 1,100 locations in 47 states, Puerto Rico, Canada and the Dominican Republic, Planet Fitness’ mission is to enhance people’s lives by providing a high-quality fitness experience in a welcoming, non-intimidating environment, which we call the Judgement Free Zone®. More than 90 percent of Planet Fitness stores are owned and operated by independent business men and women.