The Artisan Group® will be present at GBK’s celebrity gift lounge leading up to the 2016 Primetime Emmys Awards telecast, with a fabulous selection of goods handcrafted by its members. The Gift Lounge takes place September 16-17, 2016 at an exclusive location in Beverly Hills, California. 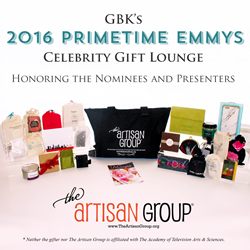 Our team has curated a diverse collection of handcrafted goods that are truly worthy of this glamorous gifting suite.

The Artisan Group® (http://www.theartisangroup.org) will once again be a platinum sponsor at GBK’s Primetime Emmys Celebrity Gifting Event, honoring the 2016 Nominees & Presenters. The Gift Lounge takes place September 16-17, 2016 at an exclusive location in Beverly Hills, California.

The Artisan Group’s exhibit is a perennial favorite for those attending GBK’s elite award show gift lounges, and their signature black swag bag is considered by many the best takeaway of the event. The Artisan Group has worked hard to make sure its appearance at this year’s Primetime Emmys Gift Lounge will be no exception.

Invitees who stop by The Artisan Group’s exhibit will receive the organization’s much sought-after gift bag, filled to the brim with exceptional handcrafted goods created by The Artisan Group’s members, who are independent artisans working in the United States and around the world. They will also have the chance to view and enjoy a number of showcase pieces designed especially for this event.

The Artisan Group’s swag bag this year is valued at nearly $1,000.00 and includes an assortment of handcrafted jewelry and accessories, spa and bath products, stationery, fine art photography, candles, clutches, pet accessories and other handmade gifts. The Artisan Group will also be gifting GBK’s 2016 charity beneficiaries, to be announced in the coming days.

Remarked The Artisan Group founder Valerie Guerrero, “The Artisan Group is thrilled to be a Platinum Sponsor at GBK’s pre-Emmys Gift Lounge, our fifth appearance at this event. Our team has curated a diverse collection of handcrafted goods that are truly worthy of this glamorous gifting suite. We can’t wait to show it all off.”

As a participant in GBK's 2016 Primetime Emmys Celebrity Gift Lounge, The Artisan Group will be supporting the following charities: American Friends of Magen David Adom (AFMDA) – AFMDA is the American fundraising arm of Magen David Adom (MDA), Israel’s national emergency medical response agency and Red Cross affiliate. MDA, Israel’s largest volunteer NGO, is a global pioneer in mass-casualty response, sharing its knowledge in the U.S. and around the world.

The Artisan Group represents a varied group of individuals who are dedicated to the handcrafted movement. With the help of The Artisan Group, members gift their products to celebrities, VIPs and members of the press at elite Hollywood and New York City gift lounges.

The Artisan Group also assists with placing member products on popular television shows like How To Get Away With Murder, Empire, Law & Order: SVU, Bones, Jane The Virgin, Modern Family, Baby Daddy, The Vampire Diaries, Days of Our Lives, The Young & The Restless, Scandal, The Voice, and many others.

The Artisan Group® also donates to charitable organizations by providing gift bags that can be auctioned off to raise funds; to date, TAG has helped raise over $10,000 for organizations including Let’s Move Together, One World Foundation and The Joyful Child Foundation.

The Artisan Group also coordinates product placement of its member's handcrafted products on such hit television shows as How To Get Away With Murder, Empire, Law & Order: SVU, Bones, Jane The Virgin, Modern Family, Baby Daddy, The Vampire Diaries, Days of Our Lives, The Young & The Restless, Scandal, The Voice, among others. Membership in The Artisan Group is juried and by invitation only.