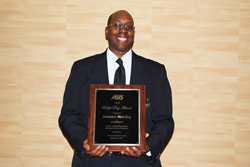 “We are proud of Officer Worsley and thrilled to see him recognized by ASIS International, the leading global organization for security professionals,” says President Glenn Burrell

Named for Ralph D. Day, CPP, a long-time member and supporter of ASIS International, the award recognizes security professionals who perform outstanding service. Worsley, who joined Sunstates in July 2015, embodies the spirit of this honor, as demonstrated by his actions on January 12, 2016.

That evening, Worsley responded to a fight in front of the office building in downtown Raleigh, N.C., where he is assigned. Three men were punching and kicking a fourth man, on the ground, who had previously attempted to rob one of his attackers. Worsley went outside and advised the individuals to “go their separate ways.” As the group dispersed, the person on the ground pulled out a knife and pursued one of the other men, stabbing him multiple times.

The man with the knife continued to threaten the other individuals, even after learning that police were en route. Worsley approached him from behind and grabbed his arm, forcing him to drop the weapon. The man was detained until police arrived and EMS provided medical assistance. Medics later revealed that one of the wounds was near fatal and that additional injury could have resulted in death.

Upon recovering, the victim returned to the site to thank Worsley, saying, “If it weren’t for Officer Worsley, I might not be here.”

Worsley received a check for $5,000 and a plaque at the Orlando ceremony. He was recognized in May 2016 as Security Officer of the Year at the Sunstates Security Annual Managers Conference in Raleigh.

“We are proud of Officer Worsley and thrilled to see him recognized by ASIS International, the leading global organization for security professionals,” says President Glenn Burrell, who founded Sunstates Security after serving 20 years in Scotland Yard. “In addition to his actions on this occasion, he represents exemplary service in his daily commitment and work ethic.”