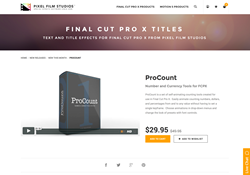 With ProCount users can easily animate counting numbers, dollars and percentages from or to any value without having to set a single keyframe

"With ProCount users can easily animate counting numbers, dollars and percentages from or to any value without having to set a single keyframe," said Christina Austin - CEO of Pixel Film Studios.

ProCount is a set of self-animating counting tools created for use in Final Cut Pro X. Easily animate counting numbers, dollars, and percentages from and to any value without having to set a single keyframe. Choose animations in drop-down menus and change the look of presets with font controls.

Customize the style of ProHits with an font, outline, and shadow options that can be found in the inspector window. Add a sharp drop shadow to achieve a clean look with clear contrast. Choose intro and outro animation controls to fade, scale, or position ProCount in and out of the scene.

This Plugin has intuitive controls that allow users to adjust the style and orientation of each animation preset. Editors can determine the scale, position, and rotation of title elements with on-screen controls. ProCount users can manipulate colors, add an outline, and a drop shadow with simple color swabs, sliders, and checkboxes.

ProCount allows Final Cut Pro X users to count up and/or down from any number. Simply look under “Number Controls” and choose a start and end value to determine the animation. For non-integers, use the decimal controls and minimal number controls to achieve partial values.