Jennifer Barton, interim director of the BIO5 Institute at the University of Arizona, is the recipient of the 2016 SPIE President’s Award and Majid Rabbani, visiting professor at the Rochester Institute of Technology, the recipient of the SPIE Directors’ Award. SPIE President Robert Lieberman made the announcements during SPIE Optics + Photonics 2016 recently in San Diego. 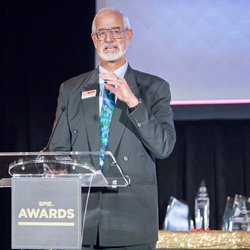 SPIE is a champion of photonics, inspiring young minds and transforming the photonics world.

Jennifer Barton is the recipient of this year’s SPIE President’s Award and Majid Rabbani of the SPIE Directors’ award, Robert Lieberman, 2016 President of SPIE the international society for optics and photonics, announced at an awards banquet during SPIE Optics + Photonics 2016 in San Diego, California, on 31 August.

Barton is interim director of the BIO5 Institute at the University of Arizona, which works to solve complex biology-based problems affecting humanity. She is also professor of biomedical engineering, electrical and computer engineering, optical sciences, and agricultural and bio-systems engineering at UA.

Barton is known for her innovative use of optical techniques in the detection and treatment of cancer and other diseases. Her work includes the development of miniature endoscopes that combine two imaging techniques, optical coherence tomography and fluorescence spectroscopy. She also explores the application of these in detecting early cancer development in patients and preclinical models.

Barton leads a two-year, $1 million project funded by the National Cancer Institute to identify imaging biomarkers of ovarian cancer, the deadliest gynecological cancer in the United States, to enable the first effective screening system for the cancer.

In accepting her award, Barton stressed the value of SPIE to researchers. She told the banquet audience that she first became acquainted with SPIE through accessing its publications, specifically the Proceedings of SPIE. The "yellow books" were the most helpful research resources she encountered as she began her career, she said.

However, she soon found that "exciting as the yellow books were, SPIE conferences were event better. "

A great strength of SPIE is that it is "not elitist, and is interesting in bringing young people in," Barton said.

Rabbani, a widely recognized leader in the field of imaging, will receive the Directors’ Award during SPIE Photonics West 2017 in San Francisco next January.

He retired this year from Eastman Kodak Company with the rank of Kodak Fellow, and is a full-time visiting professor at Rochester Institute of Technology. His research interests span various aspects of digital image and video processing and analysis.

Rabbani is symposium chair for SPIE Commercial and Scientific Sensing and Imaging 2017 at SPIE Defense and Commercial Sensing, has served on symposium and conference committees for other events, is the chair of the SPIE Fellows Committee, and was a longtime course instructor for SPIE. He has published numerous technical articles and book chapters, holds 44 U.S. patents, coauthored the SPIE Press book Digital Image Compression Techniques, and was editor of the SPIE Milestone volume Image Coding and Compression.

At the banquet in San Diego, Lieberman also presented the SPIE Gold Medal to nanomedicine pioneer Paras Prasad, Executive Director of the Institute for Lasers, Photonics and Biophotonics, State University of New York at Buffalo.

The award (announced earlier) is the society's highest honor, and recognizes his lab's development of Nanoclinic, a silica nanoshell containing various diagnostic and therapeutic agents, and other pioneering contributions to nonlinear optics, nanophotonics, and biophotonics and their application to nanomedicine, along with his three-plus decades of service to SPIE.

"SPIE is a champion of photonics," Prasad said at the banquet. The society's more than 300 student chapters help promote the field around the world, "inspiring many young minds and transforming the photonics world."

Other awards presented by Lieberman in San Diego were:

More information about 2016 SPIE award winners is on the SPIE.org website.

SPIE is the international society for optics and photonics, an educational not-for-profit organization founded in 1955 to advance light-based science, engineering, and technology. The Society serves nearly 264,000 constituents from approximately 166 countries, offering conferences and their published proceedings, continuing education, books, journals, and the SPIE Digital Library. In 2015, SPIE provided more than $5.2 million in support of education and outreach programs. http://www.spie.org