An estimated 600 grateful Americans gathered at the Hilton Chicago on Wednesday, September 14th for the 5th Annual Chicago Evening of Tribute benefitting the Navy SEAL Foundation. They were there to recognize the courage, commitment and sacrifice of U.S. Navy SEALs, the Naval Special Warfare (NSW) community and their families. The event raised $3.3 million for the charity. 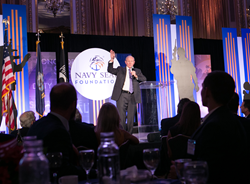 An estimated 600 grateful Americans gathered at the Hilton Chicago on Wednesday, September 14th for the 5th Annual Chicago Evening of Tribute benefiting the Navy SEAL Foundation. They were there to recognize the courage, commitment and sacrifice of U.S. Navy SEALs, the Naval Special Warfare (NSW) community and their families. The event raised $3.3 million for the charity.

General Martin E. Dempsey, the 18th Chairman of the Joint Chiefs of Staff, delivered the keynote address. His remarks underscored the continued need to support the Naval Special Warfare community and its families through the Navy SEAL Foundation. "We ask a lot of anyone who decides to put on the uniform for our country. But we also ask even more of a select few. Among that select few are the Navy SEALs. We ask them to not only use their great courage, their great military skill, but we ask them to use their imagination. One hundred percent of the time they come through and one hundred percent of the time they pay the price. And whether they pay the price in terms of a casualty or whether they pay the price in terms of separation from their family on multiple deployments, the Navy SEAL Foundation will be there to help."

The collective efforts of event Co-Chairs and Vice Chairs resulted in a sold-out event for the 5th consecutive year. Next year’s Chicago Evening of Tribute is scheduled for September 7, 2017, with Sandi and Bill Strong signing on to Chair the event.

In 2015, the Navy SEAL Foundation invested $10.9 million in its 35+ comprehensive programs specifically designed to reduce the stressors associated with life in NSW. Support generated from the 4th Annual Chicago Evening of Tribute enables the Foundation to continue responding immediately in the wake of tragedy, offer the tools necessary to cope with uncertainty associated with war and provide ongoing support and assistance.

The success of our fundraising efforts is a direct reflection of the grateful nation that supports U.S. Navy SEALs, Naval Special Warfare support personnel and their families. “We are constantly humbled by the generosity of grateful American patriots. People really do care about the sacrifices being made by those who serve and tonight’s outpouring of support is a wonderful example of that,” said Robin King, CEO of the Navy SEAL Foundation.

About the Navy SEAL Foundation

The Navy SEAL Foundation is a 501c3 national non-profit charitable organization committed to America’s most elite warriors, supporting U.S. Navy SEALs, their community and families by empowering and assisting them through challenges and triumphs. The Foundation provides over 30 tailored programs specifically designed to meet the unique needs of Naval Special Warfare (NSW) warriors, veterans, families and families of the fallen. Since the 9/11 terrorist attacks, there has been an unprecedented demand for Special Operations Forces around the globe. SEALs spend up to 270 days away from home each year in the most unforgiving environments and train at an unrelenting pace in order to maintain their ability to execute our nation’s toughest military missions. Their commitment to our country and the mission is only possible because of the significant personal sacrifices made by them and their families. We believe that they should not face these challenges alone.