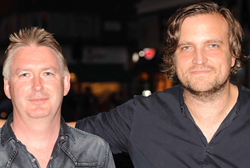 I’m really excited about being involved in Byte Night, the event sounds fun, but more than that, it’s in support of a hugely important cause.

Byte Night is the UK’s biggest sponsored sleep-out event, raising funds to prevent youth homelessness. James will join the hundreds of other sleepers who will spend the night outdoors under the elements for one night to raise money for Action for Children.

James, who will also be providing live music on the night, commented: “I’m really excited about being involved in Byte Night, the event sounds fun, but more than that, it’s in support of a hugely important cause. I was absolutely shocked when my long time friend Paul Dillon, who’s just joined the Byte Night board, told me the extent of youth homelessness in the UK; each year 80,000 young people find themselves homeless through no fault of their own.

“Of course I want to do anything I can to help kids that need support. I was lucky enough to have had a good childhood, but I know that’s not something everyone has,” added James.

Accenture’s Paul Dillon, Byte Night board member, thanked James for his support and said: “I’ve recently become involved with Byte Night and I’ve known James for a long time. When I told James about the event and how it helps so many young people he asked to get involved straight away.”

This year’s Byte Night on 7 October takes place in ten locations in the UK, and this year’s London location will be the Norton Rose Fulbright and St John’s Churchyard, SE1. Registrations can be done individually, or as a team. To register, go to bytenight.org.uk