Savanna Hartman's videos on Facebook and YouTube have gone viral and garnered tens of millions of views. She has recently appeared on various national news outlets, including CNN, Washington Post, Huffington Post, CBS News, and National Public Radio, among others. 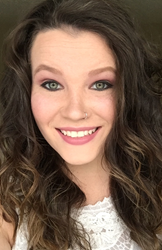 You might think I’m crazy and that this isn’t true, But with the way the world is, what have you to lose?

With an authenticity that has captured hearts around the world, Hartman’s viral spoken-word videos on Facebook and YouTube have garnered millions of views. Subsequently she has appeared on various national news outlets including CNN, Washington Post, Huffington Post, CBS News, and National Public Radio, among others. As a rising voice of hope in her generation, she now takes her message to print.

In her new book, Fierce Hope, Hartman captures the essence of her viral video platform by addressing a world that has never been more broken and lost than it is today. Maintaining the bold, passionate voice and spoken-word reflections appreciated by her thriving social media audience, she addresses topics such as finding hope in the midst of:

“This book isn’t going to have all the answers,” Hartman says. “But I will tell you one thing: this book is full of hope. It is possible to find hope in the hardest situations imaginable.”

Fierce Hope offers a compelling alternative to the negative perceptions many have about the message of Christ.

Hartman continues, “My prayer is that once you finish this book, you will not only have found fierce hope of your own, just as I did, but also that you will feel comfortable and sure enough in that hope to carry it into the lives of hurting people all over the world.”