Author L. Sheldon Oldford’s book “Omittamus Descendam: The Biblical First Contact” is a reflective dissection of the Bible to aid in the understanding of human origins.

Recent release “Omittamus Descendam: The Biblical First Contact” from Page Publishing author L. Sheldon Oldford is an engrossing discussion of the beginning of humanity and the coming of Jesus on earth. 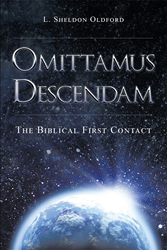 L. Sheldon Oldford, author of the new book “Omittamus Descendam: The Biblical First Contact”, was born and raised in Newfoundland, Canada, and became a US citizen in October 2002. He currently has over sixteen years in law enforcement as a corrections officer, police officer and as a detective. L. Sheldon Oldford first began a career as an evangelical preacher during his young adult life and attended a Bible college in Baton Rouge, Louisiana. He has been both a youth and an evangelistic pastor. He later became intrigued by the ancient astronaut theory, which caused him to examine the Bible with a more realistic and investigative view. His interest in this theory brought him to question the very character of the biblical God as it relates to today’s science and technology. Currently, L. Sheldon Oldford still works as a police officer and resides in Southern Arizona with his wife, Angie, of twenty-one years. They have five children.

Published by New York City-based Page Publishing, L. Sheldon Oldford’s detailed work teases apart science and religious history to offer a better understanding of where people come from and how our beginnings may have been altered.

Oldford explains further, “Advanced beings from somewhere in our galaxy descending on mountaintops, appeared to men in burning bushes. Angels, known as cherubim with four wings and wheels, flew with the sound of thunder. Beings, who ate, drank, and communicated with ancient biblical people, were Earth’s first contact with an extraterrestrial civilization. We, the humans of today, refer to these beings as the God of the Bible.”

In this book, L. Sheldon Oldford compares the knowledge people have of science and technology to the characteristics of the biblical God as the unseen, ever-present, and all-knowing deity only to find that this being is more like a flesh-and-blood ancient astronaut. This astronaut arrived on Earth thousands of years ago and made contact with biblical figures, such as Adam, Abraham, Jacob, Moses, Ezekiel, Elijah, and Elisha, which brought about the establishment of moral and religious laws that set humanity on a course of needing a savior. Could it be that Jesus Christ was an actual descendant of a flesh-and-blood father named Yahweh, a real-life ancient astronaut? Can a Christian believe in evolution and still be a Christian? Could it be that the ancient alien theory is closer to the truth than any of Earth’s religions? Are we truly the product of an extraterrestrial race of giants, created in the image and likeness of them?

Readers who wish to experience this contemplative work can purchase“Omittamus Descendam: The Biblical First Contact” at bookstores everywhere, or online at the Apple iTunes store, Amazon, Google Play or Barnes and Noble.