Aircare works with major international air carriers to provide a solution for lithium battery fires in the cabin. 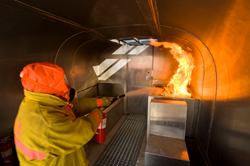 These airlines are highly safety conscious and the early adopters of a solution to a problem that is only going to increase with time.

Aircare International has been paying attention to the risks surrounding lithium battery fires onboard aircraft for a long time. The thirty-four year old aviation crew training Company has been teaching how to mitigate the risks of lithium battery fires, including laptops, personal electronic devices and phones for well over a decade as part of it’s aviation emergency procedures training courses.

The company, based in Tacoma, Washington, highlights lithium battery fires, such as the recent incident with a Samsung Note 7 phone aboard a major US carrier, as one of the fire dangers that can occur within an aircraft cabin. In doing so, Aircare has developed a product solution and clear procedures that is employed within many of the top international air carriers today including Cathay Pacific, Emirates, EVA Air and Cargo Lux.”

“We’ve been working with airlines such as Cathay Pacific and Emirates for over three years now,” said Martin Hamilton, Vice President of Business Development for Aircare International. “These airlines are highly safety conscious and the early adopters of a solution to a problem that is only going to increase with time.”

Lithium batteries are found in almost all portable electronic devices (PEDs) such as smart phones, tablets, laptops, and E-cigarettes. If a battery is manufactured with defects or is damaged it can go into thermal runaway. When this happens the batteries get hotter and hotter until they literally explode, sending the adjacent cells in the battery into thermal runaway as well. The result is a violent and dangerous chain reaction of high temperature fire, debris and smoke.

Hamilton says that the Aircare solution to lithium battery fires in the aircraft is a combination of procedures that align with FAA and International Air Transport Association (IATA) advisories, and Aircare products. “We instruct the crew members to take care of the thermal runaway first,’ said Hamilton. “They use a halon extinguisher to knock down the flames, and then they use an aqueous-based cooling agent called Firebane from a safe distance to stop thermal runaway. Firebane has the ability to rapidly cool the device about ten times quicker than water.”

“After the thermal runaway is stopped, the crews use a fire-proof bag called the Aircare FireSock to safely stow the damaged device while the crew takes care of other duties associated with the emergency. This ensures that if the device goes back into thermal runaway, the heat and fire is contained,” explained Hamilton.

Aircare says that the risks onboard major carriers are likely to increase over time. “If you stop to think about all the devices with batteries that just one passenger is carrying today, compared to fifteen years ago, it’s staggering,” said Hamilton. “Not only do we have laptops and our phones, but we have tablets, rechargeable chargers, headphones, E-cigarettes, gaming devices, and E-books. In addition, the crews are carrying their own devices used for operations such as tablets, inflight entertainment devices and point of purchase machines. The chances of a battery-related fire have grown exponentially.”

Hamilton says that the airlines are able to install the Aircare equipment for under $700 USD per aircraft. “Our solution is inexpensive, it’s light-weight, it’s small and it’s effective,” said Hamilton. “Because of this, we’re seeing more airlines, including major domestic US carriers, reaching out to work with us.”