Museum’s newest gallery features the history and development of space flight through a brilliantly colorful exhibit entitled, “The Journey Begins” 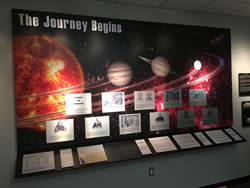 We are very grateful for the support of General Chilton, the Aerospace Corporation and others who made possible this major addition to Flight Path’s educational program

The Flight Path Museum and Learning Center celebrated the grand opening of its new Space Exploration Gallery that spotlights the history and development of space flight. Dignitaries, elected officials and invited guests were in attendance for the formal ribbon cutting ceremony and media preview.

Flight Path’s Space Exploration Gallery showcases a colorful and informative timeline of space exploration history together with a number of important space artifacts, according to Flight Path President Lynne Adelman. Included is the flight suit of astronaut Gen. Kevin P. Chilton, commander of the Endeavour and Atlantis space shuttles.

“We are very grateful for the support of General Chilton, the Aerospace Corporation and others who made possible this major addition to Flight Path’s educational program,” said Adelman.

The gallery includes colorful wall graphics and text, video presentations and artifact display cases, providing visitors of all ages with an educational and entertaining walk-through experience. Also, the Aero Club of Southern California’s Howard Hughes Memorial award trophy been relocated to the new gallery. Spearheading development of the project was a museum committee headed by Col. Stephen Soukup (USAF-ret.) of the Flight Path Board of Directors.

"The Flight Path Museum and Learning Center is a great place for students and anyone who is interested in aviation or aerospace to learn more about the role this industry played in Los Angeles' history," said Council member Mike Bonin, who represents LAX and nearby communities on the Los Angeles City Council. "This new exhibit will invigorate the imaginations and curiosity of kids throughout Los Angeles and could very likely be the driving force behind our next aviation pioneer or astronaut. I congratulate the Flight Path Museum and Learning Center of Southern California and look forward to checking out the exhibit soon."

“We are celebrating the opening of Flight Path Museum’s first exhibition dedicated entirely to space, and space exploration,” said Dr. Malina Hills, vice president of Space Program Operations at The Aerospace Corporation. “I’m so proud that Aerospace could be a part of it. It is the corporation’s hope the next generation of scientists and engineers will be inspired by something they read, saw, or experienced right here at the Flight Path Museum.”

“The Flight Path Learning Center and Museum is a true treasure for our LAX neighbors and to aviation enthusiasts throughout Southern California,” said Trevor Daley, Deputy Executive Director/Chief of External Affairs for Los Angeles World Airports. “The addition of the new space exploration gallery that highlights space flight is a great showcase display that highlights the contributions of many of our local aerospace companies. The partnership between Flight Path and Aerospace Corporation in El Segundo created a wonderful space that truly will educate and inspire our nations next space explorers.”

The new Space Exploration Gallery at Flight Path Museum is available for visitors Tuesday through Saturday, 10am to 3pm, except on major holidays. Admission and parking are free. For more information, contact (424) 646-7284.

Flight Path operates an 18,000 square foot facility on West Imperial Highway adjacent to Los Angeles
International Airport serving over 13,000 visitors each year. The Museum offers many displays of aviation history memorabilia, graphic exhibits chronicling the history of aviation in Southern California and one of the world’s largest collection of airline and aviation uniforms. Flight Path also operates the William A. Schoneberger Research Library, which houses the over 2,200 volume collection – many with historic value – of aviation and aerospace books, technical manuals and related publications. The museum also manages four college-level technical education scholarship programs that provide financial assistance of $2,000 - $5,000 to a number of deserving students each year.