Hotel room reservations should be made now for the GRC Annual Meeting & GEA GeoExpo+ to be held in Sacramento, California, USA from October 23-26, 2016 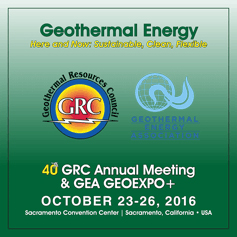 The GRC has contracted with the Sheraton Grand and Hyatt Regency for a discounted block of rooms. At both hotels there is a choice of rooms with either two double beds or a king bed starting at $145 a night excluding taxes and fees. The discount ends September 28.

Attendees can make their reservations on secure websites prepared specially for the GRC and GEA. The links are available from the GRC Annual Meeting website at: http://www.geothermal.org/meet-new.html.

More information on the biggest annual geothermal event in the world can be found on the GRC website at: http://www.geothermal.org/meet-new.html.

With the experience and dedication of its diverse, international membership bolstering a 45-year track record, the Geothermal Resources Council has built a solid reputation as one of the world’s preeminent geothermal associations. The GRC serves as a focal point for continuing professional development for its members through its outreach, information transfer and education services.