“Fashion in Bytes” was hosted by TOUTIAO and UNIPX MEDIA. In attendance were Simon Collins (the founder of Fashion Culture Design), Eric Rutherford (Instagram celebrity), Jeanne Grey (US well-known fashion stylist), and Peggy Wang (Editorial Director of Lifestyle at Buzzfeed). 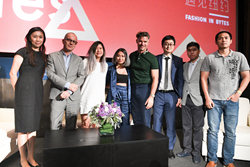 How many views should an article about "Wafers in the cigar box” have on Toutiao? Among the respective fans of MK or Vera Wang, which showed more interest?

“Fashion in Bytes” was hosted by TOUTIAO and UNIPX MEDIA. In attendance were Simon Collins (the founder of Fashion Culture Design), Eric Rutherford (Instagram celebrity), Jeanne Grey (US well-known fashion stylist), and Peggy Wang (Editorial Director of Lifestyle at Buzzfeed). Here they discussed the topic of Internet Celebrities. At the end of the show, Chinese designer Xu Yiwei brought the event to its peak by presenting her line of clothes.

According to statistics from August 2016, Toutiao has over 550 million total users, and 60 million daily active users. On average, users will have 9 sessions per day with the average time on the site of 76 minutes per day. Among 550 million Toutiao users, 45% of users are female, and 55% are male. By geography, 50% of users are from first and second-tier cities. Meanwhile 49.8% of users are from third-tier and other minor cities.

Toutiao’s largest users segment by age is 24-30 year olds as they account for 47% of all users. This segment is often categorized as “heavy internet and social media users.” 70% Toutiao users are born after 1985, and they are the users who are demanding upgraded content consumption methods. Besides, 19% of users show their preference for fashion-related content.

In the past year, the number of Toutiao’s fashion readers amounted to nearly 10 billion in page-views. Even for the long and niche content, Toutiao can still get a huge amounts of traffic due to it’s huge readership. For example, an article titled: "Wafers in the Cigar Box”, reached 250 thousand page-views and 224 comments.

At Spring/Summer 2016 Fashion Week, the most followed fashion designers on Toutiao were Vera Wang, Stella McCarteny, and Alexander Wang. At Fall/Winter 2016 Fashion Week, Stella McCartney became the most followed fashion designer on Toutiao among fashion followers. After McCarteny, Jason Wu and Vivienne Westwood followed closely behind in terms of popularity.

The most followed item for Michael Kors followers are “half skirt” and “coat.” And the most followed celebrities among users are Yang Mi, Tang Wei and, Song Jia (of the top rated TV series “Les Interprètes”).

Users following Ralph Lauren are more detail-orientated people. The most followed fashion keywords for them are “skirt”, “button” and “lace up.” The most followed celebrities are Zhang Ziyi, Yang Mi, Yang Ni, and Lin Qingxia.

From the statistics above, we noticed Toutiao users obviously have diverse tastes. We can analyze users by their “tags”/”keywords,” to meticulously draw the users’ profile. Now Toutiao has 550 million users, which is still surging and nearly covers all walks of life in China.