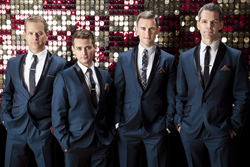 They took Broadway by storm in one of the biggest hits of all-time. Now on their 7th national tour, The Midtown Men are bringing their magic to audiences everywhere, singing their favorite 60s hits from The Beatles, The Rascals, The Turtles, Motown, The Four Seasons, and more.

This sensational production reunites Four Stars from the Original Broadway Cast of Jersey Boys. Tony® Award winner Christian Hoff, Michael Longoria, Daniel Reichard, and Tony® Award nominee J. Robert Spencer star in this one-of-a-kind concert experience celebrating the music that defined the '60s. These talented entertainers shared the Broadway stage for over a thousand performances in the mega-hit Jersey Boys. Now, as The Midtown Men, they’ve thrilled crowds on concert stages across the U.S., Canada, and in Beijing, performing over 600 shows and singing with 31 major symphony orchestras.

The Men recently released their first radio single, “All Alone on Christmas,” written and produced by rock icon and Sopranos and Lilyhammer star Steven Van Zandt and backed by Bruce Springsteen's E Street Band. They were honored to perform the song at the White House for the National Tree Lighting Ceremony in Washington DC.

The group has released two successful public television concert specials: The Midtown Men Live in Concert, taped at the New Jersey Performing Arts Center’s majestic Prudential Hall, and Meet the Midtown Men, which goes behind the songs to get an inside, personal look at the Men and their music. Both are currently airing in markets nationally.

Their recent show at NYC's famed Beacon Theater was a sellout smash and featured guest stars Shirley Alston Reeves from the Shirelles, La La Brooks from The Crystals, Gene Cornish from The Rascals, and Petula Clark, who had 3000 people up on their feet for “Downtown.”

CHRISTIAN HOFF
Christian Hoff won a Tony® Award for his performance as Tommy DeVito in Jersey Boys, as well as receiving Drama Desk, Drama League, and Outer Critics Circle Award nominations. He was named “The Master of Mimicry” by Entertainment Weekly when his voicing of over 200 characters surpassed the audio book world record and was named Audio Book of The Year. His voice-over career was launched as the voice of Richie Rich in the Hanna-Barbera cartoon series. Favorite stage roles include King Herod in the national revival tour of Jesus Christ Superstar, Governor Hugh Dorsey in the Los Angeles revival of Parade, the Original LA cast of Evita, George M. Cohan in George M!, Will Rogers in The Will Rogers Follies, Huck in Big River, and his Broadway debut in the Tony® Award-winning The Who’s Tommy. He recorded Grammy® winning cast albums for both Jersey Boys and The Who’s Tommy with famed Beatles producer George Martin. Christian has appeared on NBC’s Law & Order: SVU, ABC’s Ugly Betty, NBC’s Law and Order: Criminal Intent and ABC's All My Children.

DANIEL REICHARD
Daniel Reichard is honored to join musical forces once again with The Midtown Men. Reichard, a native of Cleveland, Ohio, is best known for his portrayal of chief songwriter and original Four Seasons member Bob Gaudio in the box-office smash Jersey Boys, a role he originated in the La Jolla Playhouse premiere and later on Broadway along with colleagues Christian Hoff and J. Robert Spencer. He followed the success of Jersey Boys with a critically acclaimed performance as Candide in Leonard Bernstein’s Candide at the New York City Opera. After graduating with a B.F.A. from the University of Michigan, he made his New York City debut with the original cast of Forbidden Broadway: 20th Anniversary Celebration. His signature style and talent paved the way to starring roles in New York City and across the country, including such shows as Radiant Baby at The Public Theater, The Thing About Men, and Jim Henson’s Emmet Otter’s Jugband Christmas at the Goodspeed Opera House. A gifted pianist and concert singer, Reichard has had sold-out engagements at New York City’s Joe’s Pub, Metropolitan Room, Ars Nova, and repeat appearances at 54 Below.

J. ROBERT SPENCER
A Tony® Award nominated actor, independent film director, producer, and writer, J. Robert Spencer originated the role of Nick Massi in the Tony® and Grammy® Award-winning Jersey Boys. He also originated the role of Dan Goodman in the Pulitzer Prize winning Broadway musical Next To Normal, for which he received nominations for both the Helen Hayes Award for Outstanding Lead Actor, and Tony® Award for Best Performance by a Leading Actor in a Musical. He has voiced two animated features: Nightmare Campus and Grave of the Fireflies. His portrayal as a psychopathic killer named Bob in the independent feature film Night of the Dog earned him a Best Supporting Actor nomination at the SMMASH Film Festival. Spencer's independent film company 7 Spencer Productions, with which he produced, wrote, starred, and directed the comedy Farm Girl In New York. The film was featured on The Today Show with Ann Currey and Al Roker, and was the official selection of the Sacramento International Film Festival (Nominated for Best Comedy and Best Actress,) as well as Big Apple, Atlanta, Buffalo Niagara, and Seattle True Independent Film Festivals, distributed by Maverick Entertainment. He recently produced and starred in his second independent feature titled Heterosexuals.

MICHAEL LONGORIA
Michael Longoria is best known for his celebrated turn on Broadway as Frankie Valli in the Tony® Award-winning musical Jersey Boys. Longoria made his Broadway debut in the smash hit musical Hairspray (2003 Tony® Award for Best Musical), later creating the role of Joey in the original Broadway cast of Jersey Boys (2006 Tony® Award for Best Musical) before taking over the role of Frankie Valli and taking his career to new heights beginning with performing solo for hundreds of thousands of fans in Times Square for Broadway On Broadway. He went on to numerous performances on television, including Broadway Under The Stars: A Tribute To Harold Prince, The US Open, and the America’s Got Talent season nine finale with Susan Boyle and Shakira. His journey recently led him back to Atlantic City with feature performance in That’s Life! with Joe Piscopo at Caesar’s.

For tickets or more information, call the State Theatre New Jersey Ticket Office at 732-246-SHOW (7469), or visit us online at StateTheatreNJ.org. The State Theatre New Jersey Ticket Office, located at 15 Livingston Ave, New Brunswick NJ, is open Monday through Friday from 10am to 6pm; Saturday from 1pm to 5pm; and at least three hours prior to curtain on performance dates unless otherwise specified. For information on group outings and discounts, call 732-247-7200, ext. 517. Some additional ticket and transaction fees may apply.