Chris Buse, Chief Information Security Officer for the State of Minnesota, has been named this year’s Public Sector Visionary Leader of the Year by the Cyber Security Summit. 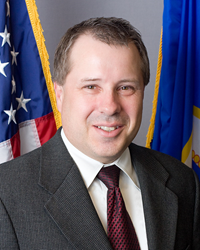 Chris Buse is the Chief Information Security Officer for the State of Minnesota.

Chris Buse, Chief Information Security Officer for the State of Minnesota, has been named this year’s Public Sector Visionary Leader of the Year by the Cyber Security Summit.

Mr. Buse will accept the award on behalf of his entire team at MN.IT Services, the State of Minnesota’s central IT organization. He will be presented with the award at 8:30 a.m. on Day 2 of the Summit, Oct. 12, at the JW Marriott Mall of America. To learn more about the Summit and to register to attend, go to cybersecuritysummit.org.

Representing one of the diverse paths that can lead to a career in cyber security, Mr. Buse started as a CPA before branching into information technology audit, which eventually led to him to a technical audit group responsible for IT audit in government. After many years working in that capacity, he was named Minnesota’s first CISO in 2007.

As an IT group that spans more than 70 different agencies, MN.IT faces the challenge of centralizing processes for organizations that have historically been separate. Prior to appointing a CISO, state agencies had adopted a wide variety of different technologies, making the IT infrastructure less efficient and more difficult to secure. Buse said his role has been to help lead a group that provides a holistic approach to the problem. He credits a strong team for the success MN.IT has achieved in that area.

“In government you always struggle with resource issues, but all the men and women on the MN.IT team have done a stellar job putting together services to protect the state of Minnesota,” he says. “Really, the team should get the award. They do all the important work for the state, so I accept this on their behalf.”

Mr. Buse is a member of the original group that helped found the Cyber Security Summit. He became involved because he saw the need for a security event geared toward thought leadership and big picture strategic issues impacting information security. Today, with a threat landscape that continues to change and a more diverse array of attacks happening increasingly quickly, he sees a greater need for collaboration than ever before.

“You can't be a successful security leader if you live in a vacuum,” he says. “You need to be part of a broader cyber security ecosystem that shares information across boundaries.”

As someone who has seen the growing need for security professionals firsthand, Mr. Buse is a strong advocate for workforce development and getting young people involved in cyber security. For the past two years, he has spearheaded a breakfast at the Cyber Security Summit for students interested in information security.

The other award given by the Summit, the 2016 Private Sector Visionary Leader of the Year, went to Brian Isle, senior fellow at the University of Minnesota’s Technological Leadership Institute and co-founder and former CEO of Adventium Labs.