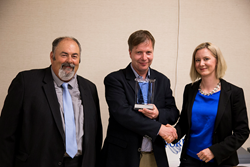 Established in 1993, The prestigious Feynman prize was named in honor of pioneer physicist Richard Feynman. The prize is given in two categories of nanotechnology, one for experiment and the other for theory. For the past 23 years, it has highlighted researchers whose recent work has most advanced the achievement of Feynman’s goal for nanotechnology: the construction of atomically-precise products through the use of productive nanosystems.

“The Foresight Institute Feynman Prize in nanotechnology is an award that recognizes progress toward the most visionary objectives in nanotechnology,” said Julia Bossmann, President of Foresight Institute. “Our laureates realize that big innovation is possible on the nanoscale. The prize acknowledges these pioneering scientists and inspires others to follow their lead.”

Prof. Grzybowski is a distinguished Professor of Nanoscience and Bioengineering in the Department of Chemistry at Ulsan National Institute of Science and Technology, Korea. He is a Group Leader at Korea’s Center for Soft and Living Matter within the Institute for Basic Science, as well as a professor at the Polish Academy of Sciences in Warsaw. Prof. Grzybowski has looked beyond individual nano-objects and their static assemblies to focus on systems that perform desired functions. Applying this systems approach to organic synthesis, he developed a model that, after training on a diverse set of reactions, was able to accurately estimate the outcomes of organic reactions. Such data-driven analyses of chemical syntheses combined with network theory and Artificial Intelligence algorithms led to optimized pathways for completely de novo and fully automated design of syntheses of complex targets, culminating in the Chematica expert system to combine vast amounts of chemical knowledge and plan synthesis pathways toward both known and previously unexplored targets. http://chemistry.unist.ac.kr/faculty/grzybowski-bartosz-a-2/

Prof. Giessibl is the Chair of the Institute of Experimental and Applied Physics in the Department of Physics, University of Regensburg, Germany. Prof. Giessibl pioneered major advancements in scanning probe microscopy for imaging and manipulating individual atoms, including the first achievement of atomic resolution by frequency modulation atomic force microscopy, inventing the qPlus sensor-based atomic force microscopy technique, and achieving subatomic resolution and the visualization of individual chemical bonds. Further advances resulted from tips with defined chemical composition and structure, improved understanding of tip-sample interactions, lateral force microscopy, and the combination of force microscopy with scanning tunneling spectroscopy and density functional theory. http://www.uni-regensburg.de/physics/giessibl/index.html

The Foresight Institute Distinguished Student Prize is awarded each year to the college undergraduate or graduate student whose work in nanotechnology is considered most notable in advancing the development and understanding of nanotechnology. This prize is generously supported by Dr. James Ellenbogen, Ravi Pandya, and James Von Ehr, II.

Conrad Pfeiffer, a Ph.D. student with Professor Christian Schafmeister in the Chemistry Department at Temple University in Philadelphia, Pennsylvania, won the 2016 Distinguished Student Prize. He has synthesized shape-programmable macrocycles (molecular rings) that resemble stiff triangles and rectangles, and that are to be developed as channels for assembling atomically precise membranes for low energy, high flux, and highly selective separations. These macrocycles act as receptors for smaller molecules. These are important steps toward the development of a universal molecular scaffold that would allow the systematic design, construction, and investigation of macromolecules that display chemical functionality in three-dimensional space. Such scaffolds will allow the design and synthesis of new catalysts, molecular sensors, and ultimately molecular machines. Conrad Pfeiffer, Schafmeister Group at Temple University