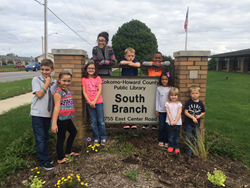 Kokomo-Howard Public Library is the latest Vote for Play awardee!

It thrills us beyond words that we could help children from eight different townships in Indiana get free access to creative play through their local library. Congratulations to the Kokomo-Howard County Public Library and their supportive community!

Upon learning the news that their library had been awarded an Imagination Playground, Lisa Fipps, Director of Marketing and Community Engagement shared, ”When we got the call that we’d won, our staff was literally squealing, shouting for joy, dancing, and jumping up and down – not everyday occurrences in a library.”

KHCPL is the first library ever to receive the Vote for Play award, offered by Imagination Playground several times each year to the school or family center that receives the most community votes. They join a growing population of libraries now offering creative play with Imagination Playground, as more and more incorporate hands-on, STEM, and makerspace activities into their scheduling.

“We love that it has loose parts that encourage children to create a play space of their own,” said Fipps.

In addition to being part of regularly scheduled library activities, KHCPL will showcase their new Imagination Playground in an upcoming 3-month interactive exhibit they will host in partnership with the American Library Association—Discover Tech: Engineers Make a World of Difference.

“KHCPL was one of only eight libraries in the nation to receive the Discover Tech: Engineers Make a World of Difference exhibit. It’ll be from February 25 to May 19. With the block set, we can let the kids do some engineering of their own!”

Fipps also had positive comments about how Imagination Playground is manufactured and the materials used.

“As a town with a lot of union workers, we were thrilled to find out that the product is made in the USA. Since we recycle and just finished a yearlong project to educate the community about the importance of saving pollinators, we care about the environment, so it was a big plus for us to see that the product is biodegradable and recyclable once it has served our patrons for many years.”

She concluded by saying, “We are truly grateful to our patrons and the citizens of Kokomo and Howard County who voted for us. We also thank all of our staff members for voting and spreading the word. KHCPL didn’t win this; everyone did!”

David Krishock, President & CEO of Imagination Playground, offered his congratulations to KHCPL, saying, “It thrills us beyond words that we could help children from eight different townships in Indiana get free access to creative play through their local library. Many thanks to the Kokomo-Howard County Public Library and their supportive community for their outstanding effort. Hooray for play!”

He went on to add, “Even though current Vote for Play session has ended, we’ll be reaching even more children through future contests, so stay tuned!”

Imagination Playground’s Vote for Play program allows communities to vote for their favorite school or family center to bring an Imagination Playground Big Blue Blocks set to the children they serve. Voting sessions run multiple times throughout the year. KHCPL is the third organization to receive the award in 2016; Finn Academy of Elmira, NY and River Oaks Elementary School of Gulfport, MS were awarded playgrounds earlier this year. Since the inception of Vote for Play, over 30,000 communities have entered the contest.

To learn more about the creative play offered by Imagination Playground, or to bring the Big Blue Blocks to a school or family center, call 1-678-604-7466 or email ContactUs(at)ImaginationPlayground(dot)org.