OxBlue Corporation, a leading construction camera service provider, has been named one of the Best Places to Work in the Metro Atlanta area by Atlanta Business Chronicle. Atlanta’s Best Places to Work list was the most competitive in the US, as measured by the ratio of honored companies to nominated companies. 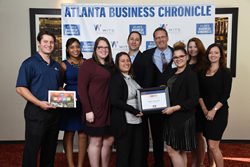 This recognition of our unrelenting commitment to creating an outstanding work environment is greatly appreciated, and it’s a testament to the daily contributions of OxBlue employees to a culture that is productive, supportive and rewarding.

OxBlue’s work environment, people practices, and other employee-ranked indicators placed the company among metro Atlanta’s best employers, based on competitive, scientifically valid employee surveys reviewed by the Chronicle in partnership with Quantum Workplace, a global leader in workplace culture assessment.

Among practices, programs and benefits cited by OxBlue employees:

“At OxBlue Corporation we are honored to be among Atlanta’s 2016 Best Places to Work award winners,” said Chandler McCormack, OxBlue CEO. “This recognition of our unrelenting commitment to creating an outstanding work environment is greatly appreciated, and it’s a testament to the daily contributions of OxBlue employees to a culture that is productive, supportive and rewarding.”

Each year, Atlanta Business Chronicle partners with Quantum Workplace to assess the workplaces of nominated companies on indicators that include how organizations value their people, professional growth opportunities, and confidence in leadership. More than 600 companies were nominated in 2016. Quantum ranked the top 100 in four categories based on their number of employees. OxBlue was among 20 companies that scored highest in the category of medium-size employers (50 to 99 employees).

Earlier this year, OxBlue earned its fifth consecutive ranking among the 101 Best and Brightest Companies to Work For® in the Atlanta area. That recognition highlights “influential, trend-setting” organizations with superior work environments, as competitively measured by the National Association for Business Resources.

About 2016 Best Places to Work
Best Places to Work is an innovative publication and awards program produced by Atlanta Business Chronicle. The rankings were determined by surveys that went directly to employees who answered a series of questions. The survey was administered by the employers and through a service provided by research partner Quantum Workplace. The rankings are numeric based on Quantum’s scoring process.