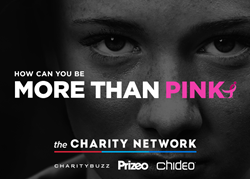 More Than Pink encourages everyone to step up and take action

We are excited to welcome Komen to our amazing digital platforms,” said the Charity Network founder and chairman Todd Wagner. We are grateful to offer Komen strategic guidance and advice from our team of digital fundraising experts.

Today, the Charity Network announced a new partnership with Susan G. Komen® in conjunction with October’s National Breast Cancer Awareness Month. The Charity Network and Susan G. Komen will work in tandem to create, distribute and promote More Than Pink™ content, offer supporters celebrity experience sweepstakes, and auction items from the world’s most recognizable names and brands, while raising money to help in the fight against breast cancer.

As part of the partnership, the Charity Network will utilize its leading digital fundraising platforms Charitybuzz, Prizeo, and Chideo to harness the power of celebrity, technology, and media to raise awareness and funds for Susan G. Komen. Through strategic digital media partnerships, the Charity Network will amplify content by distributing and promoting experiences through Chideo and syndicate through their roster of syndication partners. The Charity Network will launch a wide range of More Than Pink™ fundraising experiences through its platforms as part of the movement’s mission to inspire supporters to act, donate and get involved in the fight against breast cancer. The experiences offered will include unique opportunities ranging from attending WrestleMania 33 alongside WWE superstars, to having lunch with record-breaking IndyCar driver, Pippa Mann and touring the Dallara factory in Indianapolis, to meeting reigning ACM Entertainer of the Year, Jason Aldean, at a concert of the winner’s choice. Through these experiences, the Charity Network will help Komen reach an audience of over 3 million unique, highly qualified supporters ranging from high net worth individuals to active millennial fan bases.

“We are excited to welcome Komen to our amazing digital platforms,” said the Charity Network founder and chairman Todd Wagner. “In 2016 alone, there will be 40,000 women and men who will lose their lives to breast cancer in the U.S. This disease impacts all of us. We are grateful to offer Komen strategic guidance and advice from our team of digital fundraising experts.”

“More Than Pink encourages everyone to step up and take action – we are so grateful to the Charity Network for doing just that by way of this incredible partnership,” says Senior Vice President of Development Christina Alford. “We are proud to be expanding our efforts to reach a new audience of supporters that are just as passionate as we are in this collective fight against breast cancer.”

The More Than Pink™ movement is part of Komen’s recently announced Bold Goal, which aims to reduce the current number of breast cancer deaths in the U.S. by 50 percent over the course of the next decade.

The More Than Pink movement continues the history of success between Komen and WWE in raising awareness and funds for the fight against breast cancer. The partnership launched in 2012 with the successful “Rise Above Cancer” campaign, and to-date, has raised nearly $2 million to help Komen support research and community outreach programs and has inspired millions to take action against breast cancer. You can learn more about this partnership by visiting http://www.komen.org/wwe.

The More Than Pink™ fundraising campaign runs through October 31. Komen supporters can support the fight against breast cancer by simply visiting https://morethanpink.charitynetwork.com and making a donation or using the hashtag #MoreThanPink.

About The Charity Network
The Charity Network harnesses the power of celebrity, technology, and media to raise awareness and funds for some of the world's toughest challenges. With a mission to complement traditional fundraising models and help charities transition from analog to digital, the Charity Network has raised hundreds of millions of dollars for causes across the globe. Launched in 2016 by entrepreneur and philanthropist Todd Wagner, the Charity Network is the parent company to three top digital fundraising platforms: Chideo, Prizeo, and Charitybuzz. Each platform is a leader in its own field: Charitybuzz in online charity auctions, Prizeo in online sweepstakes and experiences, and Chideo in cause and entertainment content. These three consumer-facing platforms, all working in tandem, reach a broad and diverse group of donors from millennials to baby boomers through a network of syndicated partners including Sinclair Broadcast Group, Tribune Company, The Ellen DeGeneres Show, Twitter, Delta Airlines and more. Together with its partners the Charity Network can amplify a cause message to over 80% of US television households.

In addition to its consumer platforms, the Charity Network provides a full range of services to help celebrities, charities, and brands customize their cause messages through the CN Solutions team of digital giving experts. To learn more please visit: http://www.charitynetwork.com .

About Susan G. Komen®
Susan G. Komen is the world’s largest breast cancer organization, funding more breast cancer research than any other nonprofit outside of the federal government while providing real-time help to those facing the disease. Since its founding in 1982, Komen has funded more than $920 million in research and provided more than $2 billion in funding to screening, education, treatment and psychosocial support programs serving millions of people in more than 30 countries worldwide. Komen was founded by Nancy G. Brinker, who promised her sister, Susan G. Komen, that she would end the disease that claimed Suzy’s life. Visit komen.org or call 1-877 GO KOMEN. Connect with us on social at ww5.komen.org/social.