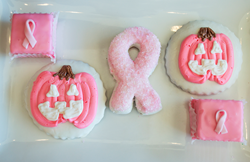 Through October 31, in support of breast cancer awareness month, Three Brothers Bakery will offer charitable pink sweets at all three of its bakery locations. A portion of select pink cookie, cupcake and petit four sales will be donated directly to Susan G. Komen Houston.

In support of Susan G. Komen Houston’s mission to save lives and bring an end to breast cancer forever, Three Brothers Bakery will continue giving to the organization for the tenth year in a row, raising over $30,000 for the organization through a yearly Race fund, donations, bake sales, sponsorships and donated product in that time span.

As a ten-year breast cancer survivor, Three Brothers Bakery co-owner Janice Jucker is passionate about supporting breast cancer awareness and educating those at risk about the importance of early detection. Janice serves as a board member of Susan G. Komen Houston and is actively involved with helping newly diagnosed patients navigate through their journey.

“We are passionate about supporting Susan G. Komen Houston and Breast Cancer Awareness Month,” says Bobby Jucker, bakery co-owner and fifth generation baker. “I have personally seen the work Susan G. Komen Houston does in the fight against breast cancer, and we want to continue to support further research, treatments and education. Every dollar counts and we want to do our part to support breast cancer awareness.”

For more information regarding Three Brothers Bakery, its breast cancer awareness items, Janice’s battle with breast cancer and survival or any of the bakery’s other sweet treats, please contact Lauren Sancton at 713-225-0880 or lauren@integrateagency.com.