GetApp releases ranking of the top LMS solutions for Q4 2016 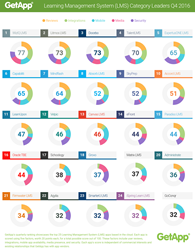 WizIQ LMS continued their first place success from last quarter with a score of 77, thanks in part to their score of 19 in user reviews

WizIQ LMS defended the top spot in GetApp’s ranking of the top 25 LMS solutions for Q4 2016, followed by Litmos LMS in second place and Docebo in third.

GetApp’s Category Leader ranking is calculated by using five distinct data points that are worth 20 points each. The highest possible score that app can attain is 100. The data points consist of mobile availability combined with the average user ratings on the Play store and App store, security, user reviews from GetApp, integration capabilities, and media presence. When combined, these data points offer a great place to start for identifying the best LMS software available on the market.

“WizIQ LMS continued their first place success from last quarter with a score of 77, thanks in part to their score of 19 in user reviews. Litmos LMS and Docebo both had scores of 73, but Litmos LMS took the tiebreaker due to its score of 17 in security. Fourth place TalentLMS got a perfect score of 20 in user reviews, which contributed to its overall score of 70,” says Suzie Blaszkiewicz, project manager for the ranking.

Click through to see the entire Q4 2016 Category Leader ranking of the top 25 LMS solutions.

More about GetApp: GetApp is the leading premium business app discovery platform on the web. Headquartered in Barcelona (Spain), GetApp serves as a platform for user-generated and editorial reviews of software and apps for businesses.
###