The UN Foundation recognizes U.S. President Barack Obama and other esteemed honorees championing solutions to the planet’s most urgent challenges 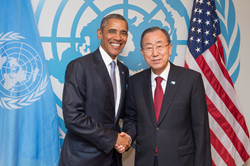 During tonight’s annual Global Leadership Awards Dinner, the United Nations Foundation will recognize five honorees who are working alongside the United Nations to tackle some of the most pressing issues of our time. The gathering will pay tribute and thank champions from multiple sectors who are advancing peace and well-being around the world through bold and visionary actions.

The 2016 Global Leadership Award recipients include:

“These honorees have helped people all over the world lead healthier and more rewarding lives by taking actions that support the UN’s ambitious goals,” said Kathy Calvin, President and CEO of the UN Foundation. “Their leadership has inspired others – from world leaders and businesses to local communities and villages – to think boldly about how to solve the planet’s most urgent challenges.”

In addition to drawing attention to the work of the UN and supporters who are helping to build a better and more prosperous future, the gathering raises funds for the United Nations Association of the United States of America (UNA-USA), a UN Foundation-led membership organization that informs, educates, and inspires Americans in support of the UN’s work.

To learn more about the awards and the UN Foundation, please visit: http://www.unfoundation.org.

The United Nations Foundation links the UN’s work with others around the world, mobilizing the energy and expertise of business and non-governmental organizations to help the UN tackle issues including climate change, global health, peace and security, women's empowerment, poverty eradication, energy access, and U.S.-UN relations.