Justin Elenburg surprised his team, including the pit crew, by delivering his father’s eulogy while the other members of the Chapo Racing team gathered around him. Justin didn’t prepare his remarks in advance, he wanted his words to come from the heart. 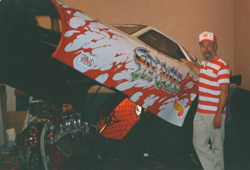 Racing is in Justin Elenburg’s blood. Elenburg’s father, who suffered from Alzheimer’s, died in June in Florida at the age of 76, was a well-known leading figure in California’s jalopy racing community.

The sport of racing automobiles has a long history on the North American continent. The utility terrain vehicles (UTVs) that young drivers like Justin Elenburg favor are carrying on a long tradition. This past August, Elenburg, the lead driver for the Chapo Racing team (http://www.chaporacing.com), paid homage in the middle of the race to the “jalopy” drivers like his late father who helped make racing more popular in the US.

Racing is in Justin Elenburg’s blood. Justin’s father, Larry Elenburg, who suffered from Alzheimer’s, died in June in Florida at the age of 76. Larry was a well-known leading figure in California’s jalopy racing community. When he died, Justin and his sister decided that they would take his ashes to the open desert and release them there during the “Best in the Desert” race, where Justin was competing. His family decided to honor his father’s love for racing by scattering his remains in Tonopah, Nevada, the midpoint of the race. Larry had lived most of his life in the desert, and racing had been an important part of his life, as it had been for his father before him.

Justin surprised his team, including the pit crew, by delivering his father’s eulogy while the other members of the Chapo Racing team gathered around him. Justin didn’t prepare his remarks in advance. He wanted his words to come from the heart.

The date of the Vegas to Reno race was August 19, 2016. His father’s ashes were scattered in Tonopah, Nevada on the 20th, a Saturday, surrounded by race cars descended from the hot rods of his youth, in the middle of a desert, a place where his father had always felt at home.

Here is part of what he said as he scattered his father’s ashes:

“He loved the desert. He loved racing. And he loved Las Vegas. I knew that this patch of sand would be a great place to set him free for the rest of eternity. Here he will be able to watch over us and continue to race with us through the years. He taught me kindness and passed on his easy-going manner and spirit to me, and I thank him for that. [He spreads the ashes in silence.] Let's make him proud.”

Elenburg’s grandfather had been the president of the California Jalopy Association. Justin carries not only his father’s legacy but his grandfather’s by becoming a race car driver and a leader in the racing community. His Chapo Racing team (http://chaporacing.com) is part of the surge in growth of UTV racing that is attracting more new fans each day.

UTVs have become more popular among racing drivers than any other vehicle class. The omnipresence of social media -- from Facebook to Snapchat -- has exponentially increased the number of people following UTV racing over the last decade. Sponsors have also taken note. It creates greater name recognition for vehicle manufacturers and informs potential buyers of the capabilities of the cars they make, customize, supply and service. As more people discover the excitement and the joy of off-road racing, interest in the sport is growing at a rapid pace.

The Utility Terrain Vehicles (UTVs) he drives for the Chapo Racing team (http://chaporacing.com) race at high speeds through hundreds of miles of open desert past rocks, cactus, and the rattlesnakes that thrive in the Arizona outback.

UTV racing has become a big deal in recent years. The Chapo Racing team is becoming well known as they compete in races like Mexico’s brutal Baja 1000 and the “Best in the Desert” competition that begins in Las Vegas and ends in Reno, covering approximately 650 miles along the way. Known as the longest off-road race in the United States, it lasts two days and attracts some of the best cars and drivers on the continent.

Chapo on the Move: Improving with Each Race

In the Vegas to Reno race, Chapo finished 12th out of 35 in the 1900 class that includes Naturally Aspirated Pro Production UTVs, and finished 102nd Overall out of 343 entries. Chapo Racing completed 648 miles in 15 hours, 22 minutes, and 39 seconds.

They are learning more with each competition and are considered one of the teams to watch closely as they rise in the rankings of UTV teams.

Chapo Racing is becoming a team to watch as it continues to gain experience in some of the toughest races on the continent. It is attracting the attention of top sponsors and becoming known for the dialogue it is establishing with a growing fan base.

Late in 2015, Justin "Chapo" Elenburg decided to race in the Southwest’s 1900 UTV class. He encountered many great drivers and fascinating people, and ultimately started his own racing team. Chapo Racing includes friends, family members, and UTV fans. Everyone involved in the team has either been a fan of off-road racing, or has become a fan. The Chapo Racing team has competed not only in local and regional races, but in Mexico’s brutal Baja 1000. Their willingness and determination impressed both fans and potential sponsors. With the enthusiastic support of Lone Star Racing, Can-Am, and other highly regarded patrons, they have competed fiercely in some of the country’s toughest races. Turning every race into a learning experience, they are quickly pressing forward on the road to a podium finish.