AS-IP Tech, Inc. (OTCMKTS: IPTK) announced today that fflya, the world’s first Bluetooth Smart airline connectivity solution, has been commissioned on an A340. 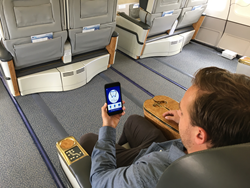 fflya airline app on an Airbus A340

fflya is a game changer

AS-IP Tech, Inc. (OTCMKTS: IPTK) announced today that fflya, the world’s first Bluetooth Smart airline connectivity solution, has been commissioned on an A340.

fflya is an inflight connectivity revolution that provides free app messaging and destination savings that will enhance the passenger’s flight experience and allow the airline to earn revenue without having to charge.

fflya substantially reduces equipment costs and eliminates the high cost of satellite transmission by combining a proprietary satellite protocol with a Bluetooth Smart network capable of connecting every passenger on-board with a single Bluetooth hotspot.

Company CEO Ron Chapman said, “fflya is a game changer because until now airlines have had only two expensive ways to connect via satellite in an aircraft – a proprietary link for the cockpit and Wi-Fi for the cabin. On the ground people are communicating more than ever using apps, with the common belief that messaging is free. fflya now meets this societal expectation in the air by delivering free app messaging and more for passengers.”

fflya provides value-added services that allow the airline to promote its brand, extend the digital reach and generate revenue in a way never seen before.

Significantly, airlines can test the unique fflya platform without any modification to the aircraft. fflya is a self-contained portable system including Satcom and custom window antenna that classifies as a carry-on device so there is no aircraft certification required.

Click here to read more about the A340 fflya program.

AS-IP Tech, Inc. is leading the world in Bluetooth Smart connectivity solutions for aircraft. The company management has a thirty-year history of flying new communication technologies worldwide. Over the past decade the focus has been on creating an alternative method to connect passengers with the aim of reducing the high costs of inflight connectivity. AS-IP successfully launched the first product on business jets in 2014 and a further two years of Research and Development saw the evolution of fflya, the world’s first Bluetooth Smart airline connectivity solution.

Safe Harbor Disclosure
This press release may include "forward-looking statements" within the meaning of the federal securities laws, commonly identified by such terms as "believes," "looking ahead," "anticipates," "estimates," "may," "will," "should," "could," "expect," "intend," "project," and other terms with similar meaning. Although the company believes that the assumptions upon which its forward-looking statements are based are reasonable, it can give no assurance that these assumptions will prove to be correct. Important factors that could cause actual results to differ materially from the company's projections and expectations are disclosed in the company's filings with the Securities and Exchange Commission. All forward-looking statements in this press release are expressly qualified by such cautionary statements and by reference to the underlying assumptions.