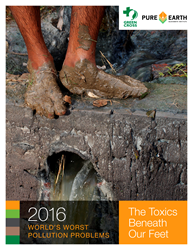 The new report, "The World's Worst Pollution Problems 2016: The Toxics Beneath Our Feet," was released by the nonprofit Pure Earth and Green Cross Switzerland on Oct. 25. Photo: Sean Gallagher

Pollution and the diseases that it causes have become a massive and extremely costly global problem... as our understanding grows, so too has our capacity to develop and implement effective changes,” -- Richard Fuller, President, Pure Earth.

"The World’s Worst Pollution Problems 2016: The Toxics Beneath Our Feet" updates the top ten point-source polluting industries based on each source’s global burden of disease.

“Pollution and the diseases that it causes have become a massive and extremely costly global problem. But at the same time as our understanding grows, so too has our capacity to develop and implement effective changes,” says Richard Fuller, President of Pure Earth.

“But low- and middle-income countries are limited in their resources to adequately address the health impacts from toxic pollution, which further marginalizes those most in need. A goal of this report and the collaboration between Pure Earth and Green Cross Switzerland is to increase understanding and funding in this area of public health.”

These industries collectively put over 32 million people at risk and account for seven to 17 million Disability-Adjusted Life Years (DALYs) in low- and middle-income countries.

SCALE OF THE PROBLEM

The number of toxic sites identified and recorded by Pure Earth, Green Cross Switzerland and dozens of local collaborators, has continued to increase and an extrapolation from this suggests that there are perhaps 150,000 sites in the approximately 50 countries where investigations are underway. The current estimate of the population at risk in low- and middle-income countries is about 200 million.

“Large as these numbers are, they are almost certainly underestimates," says David Hanrahan, Senior Advisor at Pure Earth.

“In its most current figures, the World Health Organization reports that an estimated 23 percent of all deaths in 2012 (representing 12.6 million people) and 26 percent of deaths in children under age five were attributable to environmental risk factors, including pollution. Approximately one-fifth of the global cancer incidence is associated with environmental exposures. This number is disproportionately higher in developing countries. “

The discussion surrounding pollution often fails to emphasize pollution’s disproportionate health impact on children, infants and fetuses, and consequently how it impedes societal and educational advancement of a community-at-large.

WHAT CAN BE DONE

A paramount objective of Green Cross Switzerland and Pure Earth is to find and implement practical solutions to global toxic pollution problems. This requires initiation of effective approaches. In the most urgent cases, these approaches may only be the start of a long-term cleanup.

“One of the most important areas of progress since the initial "World’s Worst" report is the gradual emergence of a broad coalition of international organizations, public and private, who have recognized the scale and importance of the toxics agenda and who are cooperating to address it,” says Nathalie Gysi, Executive Director, Green Cross Switzerland.

“The challenge of all forms of pollution is now recognized in the Sustainable Development Goals (SDGs), specifically under SDG 3 on Good Health and Well-Being. This will contribute to continued progress, and hopefully bring higher levels of investment to the fight against pollution.”

Download the full report, fact sheets and images at http://www.worstpolluted.org

ABOUT PURE EARTH – http://www.pureearth.org
Our mission is to identify and clean up the poorest communities throughout the developing world, where high concentrations of toxins have devastating health effects. Pure Earth devises cleanup strategies, empowers local champions and secures support from national and international partnerships. Interventions to mitigate these toxic exposures while protecting livelihoods have proven to be manageable, cost-effective, and eminently do-able. By partnering with and empowering local champions, we clean up chemical and waste legacy toxic hotspots, prevent re-contamination and guard against future pollution.

ABOUT GREEN CROSS SWITZERLAND – http://www.greencross.ch/en/home.html
Green Cross Switzerland facilitates overcoming consequential damages caused by industrial and military disasters and the cleanup of contaminated sites from the period of the Cold War. Central issues are the improvement of the living quality of people affected by chemical, radioactive and other types of contamination, as well as the promotion of a sustainable development in the spirit of cooperation instead of confrontation. This includes the involvement of all stakeholder groups affected by a problem.