Russia suggests to US and Europe to use transport corridor via her territory, Russian media reports but next US President should lift anti-Russian sanctions to get a deal

Fyodor Soloview, head of InterBering, LLC, favorably comments on Russian plan "United Eurasia" to build a railway line directly connecting Russia and USA via Bering Strait tunnel, responding to the articles posted in The Moscow Times and The Siberian Times on August 12th. 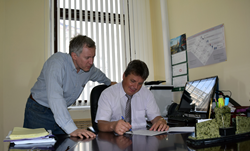 The head of InterBering, LLC, a company promoting construction of a rail line connecting North America and Asia under the Bering Strait, says the Russian Government is giving consideration to the project and doing feasibility studies, referring to the August 12th report in Moscow Times at https://themoscowtimes.com/news/russia-to-spend-200-billion-on-continent-wide-transportation-system-54967.

Soloview has made several trips to Russia to meet with Russian officials, including those in charge of railway planning ( http://www.interbering.com/Russian-Railways-support-letter.html .) Over the summer he got news that they are considering not only his plan for a Bering Strait tunnel, submitted to the Office of the Russian President on August 1, 2014, but also air trading links and new sea routes taking advantage of the receding polar ice cap.

“The scheme offers integrated shipping and aviation 'hubs' to create conditions 'for the country to move to a new social and economic level through the deep exploration of Siberia, the Far East and the Arctic', according to a letter on the plan presented to Deputy Prime Minister Arkady Dvorkovich,” The Siberian Times published on August 12th, 2016 at http://siberiantimes.com/other/others/news/n0707-futuristic-airship-scheme-plan-unveiled-to-transform-siberia-and-the-arctic/ .

“Constructing a Bering Strait tunnel along the lines of the Channel Tunnel connecting Britain and France would facilitate trade and improve diplomatic relations,” says Fyodor Soloview, president of InterBering. “It would also open up Alaska and Western Canada to vastly more economic development because of the new 1,767-mile railroad which will be built to connect Fort Nelson in Canada to Cape Prince of Wales in Alaska.”

The key would be for the U.S. and Russian governments to invest in rail lines, roadways and other infrastructure which would support the proposed Bering Strait railway tunnel, he adds.

“Currently, Russian trade with Europe is many times greater than her trade with the United States. Existing road and rail links with Western Europe are a huge reason for this. A direct rail link across the Bering Strait would be an equalizer,” says Soloview.

He notes that increased trade likewise could provide incentives for improved diplomatic relations between the U.S. and Russia and lift sanctions in exchange for participation. Both candidates seeking the presidency in this country have talked about the need to improve infrastructure and international trade.

The Republican nominee, Donald Trump, also said in an interview on October 17th, that he might meet with Russian President Vladimir Putin before he even makes it into the White House, reported by CNN at http://www.cnn.com/2016/10/17/politics/donald-trump-vladimir-putin-michael-savage/ .

"I think I could see myself meeting with Putin and meeting with Russia prior to the start of the administration. I think it would be wonderful," Trump told Michael Savage in an interview for his radio show.

“Guess what Trump will be talking with Putin if not about construction of US-Russia railroad over the Bering Strait?” - questioned Fyodor Soloview.

“The United States would have much to gain by taking the lead in this important project, perhaps even helping construct facilities on the Asian side. InterBering looks forward to bringing together government and business resources needed to make it happen,” he says.

To take advantage of the upcoming opportunity, InterBering, LLC is currently seeking member-investors and funding to begin preliminary construction work on the North American side of the Strait.

“Even if a US-Russian railroad deal will not go through in our days, we can effectively spend the next 15 years building the North American part of this railroad. The time to dig the tunnel would come later,” Soloview adds, “and by that time Russia would have different people in the government, and China will make additional efforts to accelerate the construction of the tunnel. But Alaska with its huge deposits of mineral resources and passengers eager to travel by rail will be finally connected with the contiguous United States by the railroad.”

Map of proposed railroad from Fairbanks (Alaska) to Yakutsk (Russia) via tunnel under the Bering Strait.

Map of Bering Strait and proposed network of conventional and high speed railroads in USA, Canada and Russia.